David Warner will be back in action for SunRisers Hyderabad. 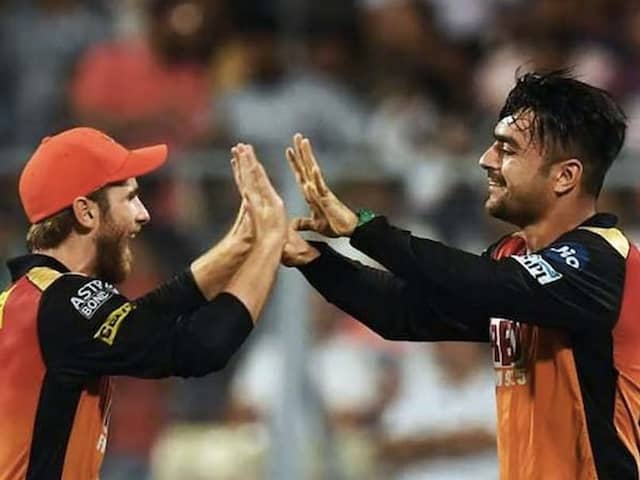 Many thought that without David Warner the SunRisers Hyderabad would struggle in IPL 2018, however, under the leadership of Kane Williamson, the Hyderabad team finished runners-up and were one of the most consistent teams of last season. Williamson not only made his mark as a captain but was exceptional with the bat. Warner is expected to return to the team and with the likes of Shakib Al Hasan, Vijay Shankar, Rashid Khan, Jonny Bairstow and Khaleel Ahmed also in the squad, SunRisers are definitely one of the teams to be wary of.

Here are the five SunRisers Hyderabad players to watch out for in IPL 2019:

The New Zealand skipper made his Indian Premier League debut for SunRisers Hyderabad in 2015 but didn't really get a look-in that season and the next. However, the 2017 season was the breakthrough year for Kane Williamson as far as the IPL is concerned. The right-hander played seven matches, scoring 256 runs at an average of 42.66 and a strike rate of 151.47.

Last season in the IPL, Williamson took his batting to a whole new level, ending the tournament as the top run-getter. In 17 matches, Williamson scored a mammoth 735 runs at an average of 52.50 and a strike rate of 142.44. The 28-year-old played some crucial knocks for his team, amassing eight half-centuries in the process. If the New Zealander performs at a similar level this season, SunRisers, who boast a brilliant bowling attack, might be the team to beat.

The talented right-hander was the biggest buy (Rs 11 crore) for SunRisers Hyderabad (SRH) in the 2018 auction, not taking into account the retained players. A lot of faith was shown in the India international but barring a couple of knocks, Pandey failed miserably.

Pandey played 15 matches for SRH, scoring 284 runs at an average of 25.81. The 29-year-old, however, improved as the year passed and impressed for India A against New Zealand A in December last year. Pandey carried that form into the Ranji Trophy, making some key contributions as Karnataka reached the semi-final, where they lost to Saurashtra.

David Warner has had a tumultuous year after being banned along with Steve Smith for 12 months last year for their roles in Cape Town ball-tampering scandal. Warner and Smith will be eligible for selection again when their ban ends on March 29. However, will not be available till the end of March with Australia facing Pakistan in a five-match ODI series that ends on March 31.

Warner will also be unable to play the IPL in its entirety given Cricket Australia has scheduled a 2019 World Cup training camp for the start of May. Australian players have been told they must also make themselves available for that camp, well before the IPL final on May 19. The left-hander's form and fitness also might be a concern. Warner, who played for the Sylhet Sixers in the Bangladesh Premier League, left the tournament midway after suffering an elbow injury.

SunRisers' trump card with the ball in hand will certainly be Afghanistan phenomenon Rashid Khan. The 20-year-old has been a revelation in the tournament after making his IPL debut in 2017. That year, the leg-spinner took 17 wickets in 14 matches and followed it up with an even better performance last season.

Bhuvneshwar Kumar has been one of the most impressive bowlers in India in recent times but injuries have not been kind to the fast bowler. After back-to-back stunning performances in 2016 and 2017 for SRH, where he took 23 and 26 wickets respectively, Bhuvneshwar managed just nine in 12 matches in the 2018 season.

The right-arm fast bowler was well below par last season with a niggling back injury ruling him out for a few games. However, the 29-year-old seems to have regained full fitness and had decent outings in the limited-over series in Australia and New Zealand. He played in all the ODIs and T20Is in Australia and New Zealand without any injury problems, which will come as massive relief to the SRH team management.

Sunrisers Hyderabad Cricket IPL 2019
Get the latest Cricket news, check out the India cricket schedule, Cricket live score . Like us on Facebook or follow us on Twitter for more sports updates. You can also download the NDTV Cricket app for Android or iOS.