Rajasthan Royals are currently seventh while Chennai Super Kings are sitting pretty at the top of the IPL 2019 table. 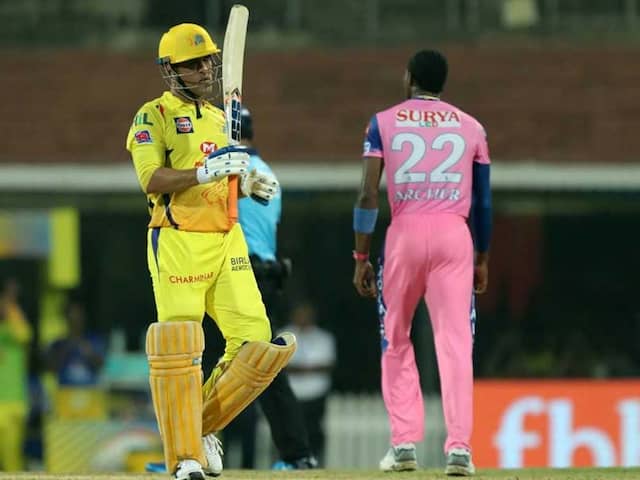 Rajasthan Royals will host current IPL 2019 league leaders Chennai Super Kings at the Sawai Man Singh Stadium in Jaipur on Thursday. There are three factors from which the visiting team can take confidence from - the disaparate forms of the two teams, the fact that the Jaipur track has been favouring slow bowling and maybe also from MS Dhoni's matchwinning performance in the reverse fixture. RR are currently seventh among the eight teams, with just one win in five matches. Their sole win came against 8th-placed Royal Challengers Bangalore at home. In contrast, CSK registered a clinical seven-wicket win over Kolkata Knight Riders on Tuesday and are at the top of the table, with five wins from six matches.

Under the astute captaincy of Mahendra Singh Dhoni, CSK boasts of a perfectly balanced squad to excel on any surface and all conditions. Rajasthan Royals, on the other hand, are still struggling to find their bearings. After losing their last match, they find themselves in a precarious position, and have to win almost all their remaining games to keep their play-off chances alive.

Rajasthan Royals have failed to seize opportunities in their earlier matches and in the previous outing against KKR, they were totally outplayed on home turf. Sanju Samson, who had cracked the first ton of this IPL, is still recovering from an injury and after a bright start to the season, Jos Butler too has failed in the last couple of innings.

The biggest positive for the home team will be the return to form of former Australian captain Steve Smith. Smith scored 38 against RCB before anchoring his team to 139 with an unbeaten 73 against KKR.

Skipper Ajinkya Rahane, Rahul Tripathi and Ben Stokes too have been below par with the bat. To add to their woes, Rajasthan Royals don't have the depth and bench strength to overcome the tough situation.

Their bowling too appears to be lacking in ideas and the likes of Stokes, Jofra Archer, Jaidev Unadkat, and Dhawal Kulkarni will have to pull up their socks against an in-form CSK.

However, captain Rahane feels there is no need to hit the panic button yet. "I think there's no need for us to panic yet. Out of the five matches that we played, we lost badly in just one game. We played well in our last four matches, out of which we could have won three. It's not too late for us," he had said after the loss against KKR.

CSK, on the other hand, will be brimming with confidence having defeated the Royals earlier in the season, when Dhoni smashed an unbeaten 75 to clinch an eight-run victory. Their batting looks solid with Shane Watson and Fau Du Plessis at the top while the middle-order consists of Suresh Raina, Ambati Rayudu, Kedar Jhadav and Dhoni.

CSK's bowing unit, which has an impressive mix of pace and spin, will look to exploit the Sawai Man Singh wicket, which has been playing slow and low.

Steven Smith IPL 2019 Rajasthan Royals vs Chennai Super Kings, Match 25 Cricket
Get the latest Cricket news, check out the India cricket schedule, Cricket live score . Like us on Facebook or follow us on Twitter for more sports updates. You can also download the NDTV Cricket app for Android or iOS.