"Feed Off His Energy": Dwayne Bravo All Praise For MS Dhoni After Stunning Knock For CSK vs RR

MS Dhoni guided Chennai Super Kings to a winning total of 175/5 despite his team being reduced to 27/3. 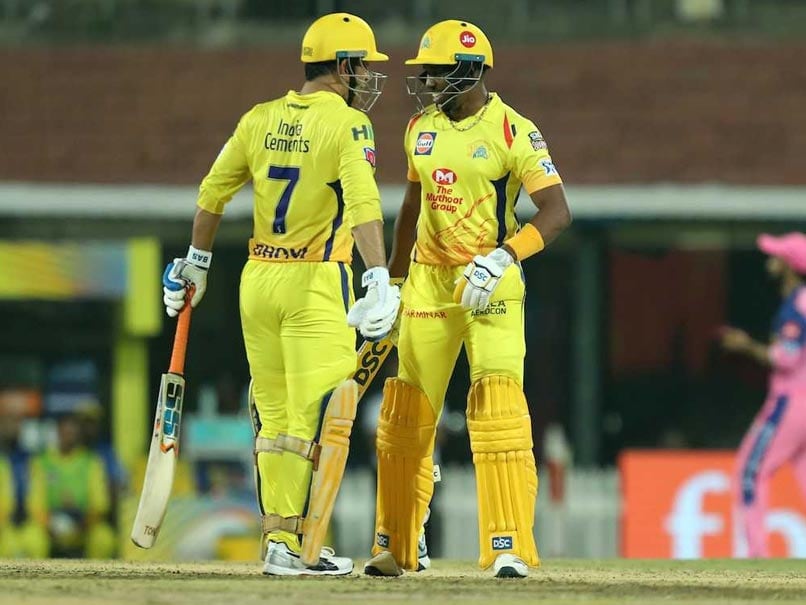 MS Dhoni and Dwayne Bravo added 56 runs for the 5th wicket for CSK vs RR.© BCCI/IPL

Dwayne Bravo lavished praise on Chennai Super Kings captain MS Dhoni, who produced a match-winning knock for CSK vs Rajasthan Royals (RR) IPL 2019 clash at the MA Chidambaram Stadium in Chennai on Sunday night. Bravo had the best seat in the house as Dhoni teed off and smashed an unbeaten 75 off 46 balls, including four sixes and as many fours. MS Dhoni's stunning batting performance helped hosts CSK post 175 for five, despite being reduced to 27 for three in the first five overs.

Following Dhoni's heroics with the bat, Dwayne Bravo was all praise for his captain and revealed what it is to bat with the former India captain.

"He is very calm and composed. He knows his game, he knows his strength. For me it's just a matter of feeding off his energy. He encouraged me to be positive. I enjoy batting with him because he makes batting look so easy," Dwayne Bravo said during a conversation with CSK teammate Sam Billings.

Here is a clip of the video:

CSK were tottering at 27 for three when MS Dhoni walked in. With Suresh Raina (36) for company, Dhoni added 61 runs for the fourth wicket, pushing the ball around and later the former India skipper raised a 56-run stand with Dwayne Bravo, who added scored a quickfire 27 off 16 balls.

Royals were disciplined throughout but pacer Jaydev Unadkat (1/54) conceded 28 runs in the final over with Dhoni finding three of his four sixes in that over after Ravindra Jadeja (8) lofted the paceman for a maximum.

Rajasthan Royals needed someone to play a Dhoni-like innings but none took that responsibility and they could manage 167 for 8, suffering their third defeat in as many matches.

Suresh Raina Sam Billings IPL 2019 Chennai Super Kings vs Rajasthan Royals, Match 12 Cricket
Get the latest updates on ICC T20 Worldcup 2022, check out the Schedule and Live Score. Like us on Facebook or follow us on Twitter for more sports updates. You can also download the NDTV Cricket app for Android or iOS.