IPL 2019: Royal Challengers Bangalore - Five Players To Watch Out For 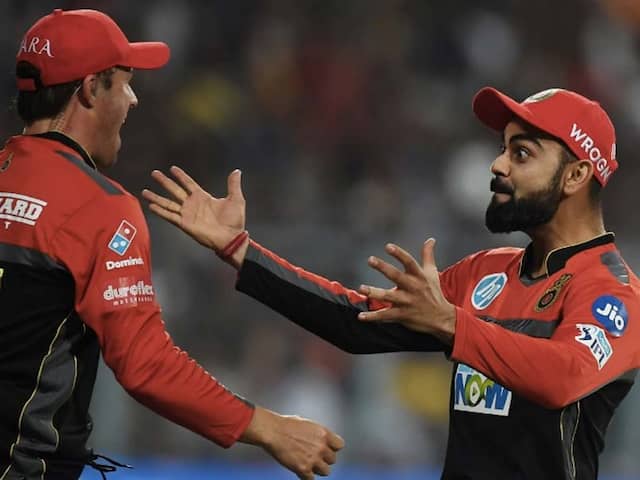 Virat Kohli is arguably the best batsman across formats at the moment.© AFP

Royal Challengers Bangalore, who are yet to win the coveted Indian Premier League title, once again look solid on paper ahead of the 12th season of world's biggest T20 extravaganza. In a bid to end their title drought in the upcoming season, the perennial underachievers retained a vast majority of the team's core ahead of the 2019 Auction in Jaipur in December last year. The IPL franchise, who finished sixth in the 2018 edition, chose to retain the experienced candidates including captain Virat Kohli, AB de Villiers, Parthiv Patel, Yuzvendra Chahal and Umesh Yadav. However, RCB's biggest strength in the upcoming season lies in their all-rounders.

Here is a look at five RCB players to watch out for in the upcoming edition of IPL.

Marcus Stoinis, Australia's men's One-day International Player of the Year 2019, was in a red hot form with both bat and ball for his franchise Melbourne Stars in the recently-concluded season of the Big Bash League.

RCB will expect Stoinis to replicate his BBL form in IPL as the 29-year-old's numbers in the Indian T20 league are not so impressive.

Royal Challengers Bangalore have always been a top-heavy side with Virat Kohli and AB de Villiers in their ranks. However, the presence of Shimron Hetmyer can give RCB's batting line-up the much-needed X-factor.

Hetmyer shot into the Indian mind space with some brutal hitting during the ODI series against India in October 2018. The Windies batsman smashed 106 off 78 balls and 94 off 64 balls in back-to-back games in Guwahati and Visakhapatnam.

The Caribbean Premier League 2018 proved to be a breakthrough tournament for Hetmyer as he scored 440 runs from 12 matches at a strike rate of 148.14.

AB de Villiers, with his exhilarating batting and pyrotechnics in the field, possesses enough firepower to single-handedly win matches for the Royal Challengers Bangalore.

The South African superstar, who announced his retirement from international cricket just four days after RCB exited the 11th season of IPL, is currently the third-highest run-getter for the team, behind only Virat Kohli and Chris Gayle.

Since moving to the Bengaluru-based franchise in 2011, the 34-year-old has been incredibly consistent and will continue to be one of RCB's most important players in IPL 2019.

Virat Kohli, arguably the best batsman across formats at the moment, is the second highest run-getter in the IPL behind Suresh Raina.

Virat Kohli has been playing for RCB since the inception of the IPL in 2008 and has scored 4,948 runs from 163 matches so far.

Yuzvendra Chahal, one of the 14 players retained by the Royal Challengers Bangalore ahead of the IPL 2019 auctions, has been a part of the franchise since 2014.

The 28-year-old, who has been retained by the franchise for his sixth straight season, has picked up 82 wickets and is the highest wicket-taker for RCB at the moment.

Chahal has been a regular member of the Indian limited-overs team under Virat Kohli and the leg spinner will be his skipper's go-to guy to break partnerships in the IPL 2019 as well.

Chahal, who has mastered the art of wicket-taking on India's best batting pitches, will lead RCB's bowling attack which includes the likes of Umesh Yadav, Mohammed Siraj and Washington Sundar.

Yuzvendra Chahal Shimron Hetmyer IPL 2019 Cricket
Get the latest Cricket news, check out the India cricket schedule, Cricket live score . Like us on Facebook or follow us on Twitter for more sports updates. You can also download the NDTV Cricket app for Android or iOS.