The controversy arose because Amit Mishra seemed to change his course in the middle of his run. 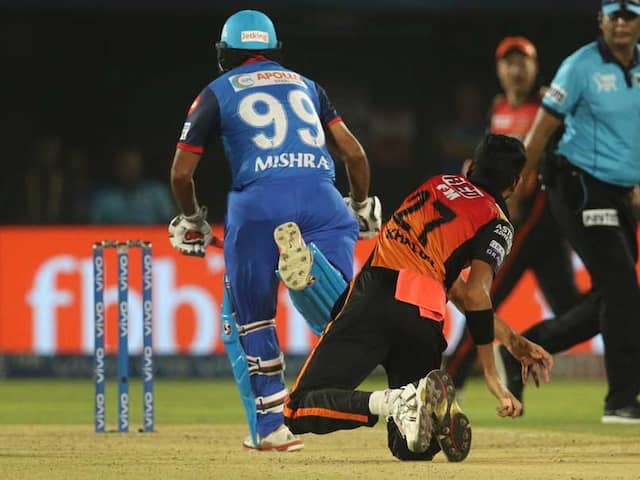 The last over of the Indian Premier League (IPL) Eliminator between Delhi Capitals (DC) and SunRisers Hyderabad (SRH) saw some high drama, with the tipping point being Amit Mishra being adjudged out for obstructing the field -- the rarest of rare form of dismissals. The incident happened with DC requiring two runs to win off the last three balls, with Mishra desperate to get off strike. In IPL history, there has been only one other instance of a batsman being given run out for obstructing the field -- Yusuf Pathan, for Kolkata Knight Riders against Pune Warriors, in 2013.

This form of dismissal, as mentioned in Law 37 of the Laws of cricket established by Marylebone Cricket Club, stipulates that if the batsman, at any time while the ball is in play and without the consent of a fielder, uses his bat or any part of his person, to return the ball to any fielder, he will be out.

The controversy arose because Mishra seemed to change his course in the middle of his run as he realized that he would not be able to complete the run. Khaleel Ahmed, the bowler, collected the keeper's throw and attempted to throw the ball to the non-striker's end. The throw, however, struck Mishra's right arm.

The fielders went up in appeal straightaway and umpires signaled that a review would be taken for the sake of clarity. There was some confusion over the review as well, with umpires initially signalling not out after having checked that Mishra had not edged the ball to the keeper.

However, Mishra's run was later reviewed and he was found to have intentionally blocked the throw with his body.

The wicket would, however, come to naught as Keemo Paul would smash the very next ball for a boundary to seal victory for DC and ensure their entry into Qualifier 2.

Yusuf Pathan IPL 2019 Cricket
Get the latest Cricket news, check out the India cricket schedule, Cricket live score . Like us on Facebook or follow us on Twitter for more sports updates. You can also download the NDTV Cricket app for Android or iOS.