The trio were arrested by the police earlier in the day (May 16, 2013) alongwith 11 bookies. In a media briefing on Thursday afternoon, Delhi Police showed clippings of three matches where the players were involved in 'fixing' specific overs. 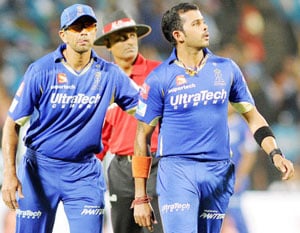 With the fresh spot-fixing saga, striking the Indian Premier League this time, Indian cricket has been rocked. S Sreesanth, Ajit Chandila and Ankeet Chavan, all belonging to the Rajasthan Royals, are the alleged culprits and their skipper Rahul Dravid - known for his integrity and professionalism - is in a state of shock, to say the least.

"I am shocked, disappointed, and distressed by the events that have resulted in the arrests last night and this morning. Rajasthan Royals is a special team, where we have always operated like a family - so this is particularly devastating," said the former Indian star batsman in a press release by the team.

The trio were arrested by the police earlier in the day (May 16, 2013) alongwith 11 bookies. In a media briefing on Thursday afternoon, Delhi Police showed clippings of three matches where the players were involved in 'fixing' specific overs.

"Spot fixing and corruption have hung over the game of cricket, and I know that the BCCI and RR take the same zero tolerance view of the situation. The RR owners and management have made their zero tolerance views clear on every possible occasion, and I am sure that they will support any action taken," said Dravid.

Dravid, who has ably led the Rajasthan side into the playoffs this season, despite missing the big names and having limited resources at his disposal sounded visibly disapoointed but wanted to forget the incident and move on since the IPL trophy beckons.

"For me, as a captain and leader, I have to focus on ensuring that the team fulfill their enormous potential and continue to play in the 'Rajasthan Royals' way. Our players are devastated that our performances may have been affected, as they have a desire to win that has been evident throughout the tournament. I hope that our fans get behind us even more, and that we become stronger as a unit - which often happens in times of adversity," concluded Dravid.

Paddy Upton, the coach of the Royals, too resonated Dravid's words.

"As Rahul says, the Rajasthan Royals environment is a special one, where we focus on teamship, focus on the cricket, identify new players and promote young players to the front line. We challenge inexperience to compete with the most experienced - and that approach has risks. Today has seen an unfurling of events that have left us all shocked and disappointed, and we will support the franchise, the BCCI and the authorities in taking necessary actions to root out an evil that plagues our game. However, we will not let the team lose its focus on completing what has been a magnificent tournament. We cannot let 'bad eggs' ruin the game that we all love, affect the values that RR holds dear, and destroy an environment that we have worked hard to take to a new level."

Comments
Topics mentioned in this article
IPL 2013 Cricket Rahul Dravid Ankeet Chavan Sreesanth Rajasthan Royals
Get the latest updates on ICC T20 Worldcup 2022 and CWG 2022 check out the Schedule, Live Score and Medals Tally. Like us on Facebook or follow us on Twitter for more sports updates. You can also download the NDTV Cricket app for Android or iOS.