The 41-year fast bowling great is working as a mentor with the Sunrisers Hyderabad in the ongoing Indian Premier League. 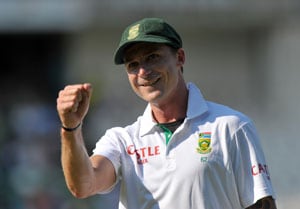 Former Pakistan skipper Waqar Younis says Dale Steyn is among the top three fast bowlers of all time and reckons the South African has it in him to "hit the top" if he keeps going for a another 2-3 seasons.

"Dale Steyn is definitely in the top three for me. And if he keeps going like this for the next two-three years, he'll hit the top. Not many bowlers swing the ball at his pace and have his fitness," Waqar said.

The 41-year fast bowling great is working as a mentor with Sunrisers Hyderabad in the ongoing Indian Premier League (IPL).

"I don't want to offend anyone because there have been some great bowlers in the last four-five decades that I can remember. We've had Imran Khan, Kapil Dev, Dennis Lillee, Glenn McGrath, Wasim Akram, Michael Holding and so many big names," he was quoted as saying by the IPL website.

Waqar was candid in his admission that he is a "big fan" of Steyn who has played a key role in getting his team to a good position in the tournament with eight wickets at an average of 19 and an economy rate of 5.46.

Waqar also hopes Ishant Sharma would live up to his potential in the future.

"He is a very, very hard-working kid. He really wants to learn. Fair enough, he hasn't lived up to his potential up until now but he is on his way. I believe he will do well in the future."

The Pakistani great said unhelpful conditions in the Indian sub-continent was Ishant's undoing.

"The first and the biggest reason are the slow pitches in India. They don't suit his bowling style. He has played most of his 50 Test matches in India.

"I think it has a lot to do with his action as well. He's got a hard action and his height makes it even tougher for him. At times, he also tries to do too much when he doesn't get wickets. We are trying to get him to bowl more good deliveries in a row," added Waqar.

Comments
Topics mentioned in this article
Cricket Dale Steyn Wasim Akram Waqar Younis Glenn McGrath IPL 2013 Ishant Sharma Sreesanth Pakistan Cricket Team Sunrisers Hyderabad Dennis Keith Lillee
Get the latest updates on India vs South Africa and check out  Schedule, Results and Live Score. Like us on Facebook or follow us on Twitter for more sports updates. You can also download the NDTV Cricket app for Android or iOS.