Under Rahul Dravid, the team has managed to fortify its home defences and Delhi Daredevils could hardly put a blemish on their winning record here. A look at the stats from the match. 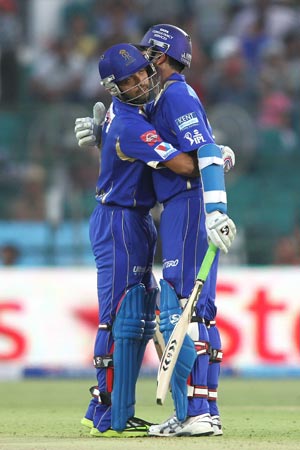 # Rajasthan Royals' magnificent nine-wicket win is their largest in terms of wickets over Delhi Daredevils at the IPL. Their biggest IPL victory being by ten wickets againt Mumbai Indians at Wankhede Stadium, Mumbai on May 20, 2011 - their only other nine-wicket triumph is against Punjab at Jaipur on April 7, 2010.

# Rajasthan Royals have won all seven IPL games played this year at home, enjoying 100% success rate. Their best winning sequence at this venue is eight between April 21, 2008 and April 7, 2010.

# Rajasthan Royals and Delhi Daredevils have won six games each out of the twelve contested at the IPL 2013.

# Pravin Tambe (41 years and 211 days old) is the oldest cricketer to make his debut at the IPL, surpassing Brad Hogg, who was 41 years 65 days when he appeared for Rajasthan Royals vs Mumbai Indians at Wankhede Stadium, Mumbai on April 11, 2012.

# Mahela Jayawardene's run-aggregate of 259 (ave.21.58) in twelve matches is the next highest for Delhi Daredevils in the present tournament.

# Ben Rohrer (64 not out off 40 balls) has posted his highest score at the IPL/Twenty20. The said innings is his third fifty in Twenty20.

# James Faulkner, with 18 wickets at 14.16 runs apiece in ten matches, is the top wicket-taker for Rajasthan at the IPL.

# Rohrer and Jadhav were involved in a stand of 76 (unbroken) for the fifth wicket - Delhi's second highest against Rajasthan at Jaipur - the highest being 83 between David Warner and Venugopal Rao on April 12, 2011.

# Rahane and Dravid have shared an opening stand of 108 - Rajasthan Royals' highest for any wicket against Delhi Daredevils at the IPL, eclipsing the 99 for the first wicket by the same pair at Feroz Shah Kotla, Delhi on April 29, 2012.

# The opening pair of Rahul Dravid (53) and Ajinkya Rahane (63 not out) provide the first occasion of registering half-centuries in the same innings twice in the present competition. They had first achieved the distinction against Pune Warriors at Jaipur on May 5

# Six players at the IPL 6 have posted four innings of fifty or more - David Miller, Rahul Dravid, Rohit Sharma, Chris Gayle, Michael Hussey and David Warner. The only player to feature in a winning side while recording four fifties is Hussey.

# Dravid's 53 off 48 balls is his eleventh fifty at the IPL - his eighth as captain. For the first time in an IPL season, he has posted four fifties.

# Rahane has recorded a hundred and nine fifties at the IPL.

# Rahane has received his fifth Man of the Match award at the IPL.

Comments
Topics mentioned in this article
Cricket IPL 2013 Rahul Dravid Shane Watson Ajinkya Rahane Delhi Daredevils Rajasthan Royals
Get the latest updates on ICC T20 Worldcup 2022 and CWG 2022 check out the Schedule, Live Score and Medals Tally. Like us on Facebook or follow us on Twitter for more sports updates. You can also download the NDTV Cricket app for Android or iOS.