Hyderabad's Australian Tom Moody says his team has sorted out its batting blues as a spot in the top 4 of the Indian Premier League looms large. New track at Uppal likely to see good scores. 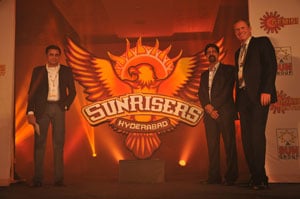 Sunrisers Hyderabad and Chennai Super Kings approach Wednesday night's IPL match at the Rajiv Gandhi International Stadium, Uppal, Hyderabad with different aspirations. While former champions and tournament pacesetters CSK are two wins away from a playoff berth, a victory for Sunrisers not only mean a cent per cent home (win) record but a No. 4 spot ahead of Bangalore.

Hyderabad coach Tom Moody feels his batsmen have sorted out a few worries to put up challenging totals on difficult tracks. The giant Aussie is backing skipper Kumar Sangakkara to come good at a time when the team is hitting a crucial phase of the league.

"We were very aware in our mid tournament review that there are certain areas we needed to sharpen up and the batting is certainly one of them. Our batsmen have had to deal with pretty tough surfaces and if you look at the average of totals in the games that we have played, they have all been relatively low. The pleasing thing for me is that different players have done well on different occasions," Moody said.

Moody is backing Sangakkara to come good on Wednesday. The former Sri Lankan captain has scored just 117 in his eight innings so far, with a dismal average of just over 14.

"We feel Sangakkara is batting pretty well and has been instrumental in stringing important partnerships in the tournament so far. There is no pressure on Sangakkara to perform. We know he is a class act and you know class players tend to step up against class oppositions," Moody said.

It's going to be a new track at the Uppal on Wednesday night. Moody is of course banking on his bowlers to strike. With Dale Steyn and Amit Mishra in good form, even Chennai Super Kings will be circumspect. More so after their 79 all out against Mumbai Indians at the Wankhede Stadium on Sunday.

Comments
Topics mentioned in this article
Cricket IPL 2013 Sunrisers Hyderabad Chennai Super Kings Thomas Masson Moody
Get the latest updates on ICC T20 Worldcup 2022 and CWG 2022 check out the Schedule, Live Score and Medals Tally. Like us on Facebook or follow us on Twitter for more sports updates. You can also download the NDTV Cricket app for Android or iOS.