Hyderabad vs Mumbai, Stats: Sunrisers yet to lose at home in IPL 2013

It was a brilliant bowling performance by Amit Mishra and Ishant Sharma while Shikhar Dhawan was his usual self, guiding their team to a convincing win. 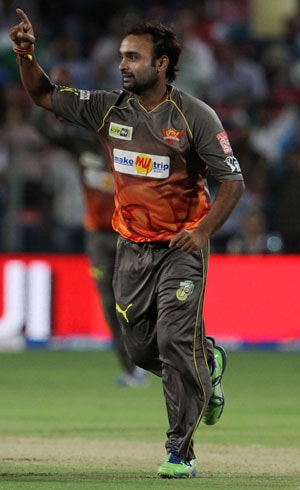 # Sunrisers Hyderabad's convincing seven-wicket triumph is their biggest at the IPL, eclipsing the five-wicket win against Kings XI Punjab at Uppal on April 19, 2013.

# Sunrisers Hyderabad defeated Mumbai Indians with twelve balls remaining - their biggest in terms of balls to spare at the IPL.

# After three victories, Rohit Sharma has lost his first game as captain at the IPL 2013.

# Amit Mishra (16 wickets at 14.81 in ten matches) has become the third bowler to take 16 wickets at the IPL 2013, joining James Faulkner and Dwayne Bravo.

# Ishant Sharma (2/15) has received his second Man of the Match at the IPL.

# Dale Steyn has bowled 120 dot balls - the most in the present tournament.

# Dinesh Karthik has recorded his fourth duck at the IPL.

# Harbhajan has dismissed seven batsmen caught and bowled - a record at the IPL.

# Shikhar Dhawan (73 not out off 55 balls) has posted his second fifty at the IPL 2013 - his first being 63 not out against Chennai Super Kings at Chennai on April 25.

# Dhawan's outstanding innings is the highest score by any Hyderabad batsman at the IPL 2013 apart from becoming the only batsman to record two fifties for his team.