Anatomy of the IPL spectator

Indians pride themselves on being cricket-crazy, though that is gradually veering towards cricketer-crazy, but you can't but admire the spunk and the resilience of the Indian fan who, despite hurdles galore, finds the resolve and the determination to brave the odds and turn up at the ground, day after day, match after match. 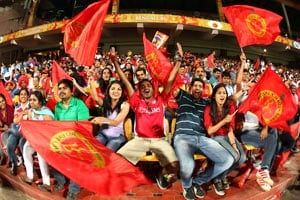 For the lay fan, watching a game of cricket at any ground in India can be the most torturous experience. Not a Ranji Trophy game, not any other domestic fixture, but an international match or a match in the world's most famous domestic competition with an international flavour, the Indian Premier League.

The 'torture', if you will, begins from the time you decide you want to go to the ground and watch 'live' action. The vast majority is happy to buy tickets, though oftentimes there is an inexplicable clamour for passes from even the most well-off because a pass, especially one that puts them in prime viewing position, is considered a status symbol as much as anything else. "I can afford to buy a 100 tickets, but I would rather have a pass," is an archetypal Indian mindset, but that's another matter altogether.

Buying a ticket for a cricket match has become increasingly easier in the era of the internet. You can log on, book your tickets and collect them from specified points, an exercise that is becoming increasingly professional. There haven't been too many complaints of the online system letting people down, though it is inevitable that, in India, more tickets are sold at the box office than online.

If you aren't savvy enough or equipped enough to buy a ticket online, the only other option available is to queue up in front of ticket counters, patiently await your turn and pray to all the gods that by the time you wend your way through the queue, the ticket of your choice is still available. It's an exercise that can be physically, mentally and emotionally draining. Tales of people queuing up overnight, with food, blankets, water and means of entertainment, aren't fictional; indeed, before mega events like the World Cup or an important One-Day International, such scenes are commonplace, not unlike in the days gone by when people used to line up outside the US Embassy in Chennai and elsewhere in a bid to procure a visa to the promised land.

The process of buying a ticket at the counter can be cathartic, especially if you are the sort that can feel lonely even in a crowd. There is a certain elation at finally having got your hands on the piece of paper that can facilitate your entry into the ground so that you can shout yourself hoarse, but also an inexplicable but perhaps inevitable mental letdown too once you know that you have bought the right to be at the venue. Especially when the realisation dawns that only step one of what is an arduous and demanding process has been completed.

Indians pride themselves on being cricket-crazy, though that is gradually veering towards cricketer-crazy, but you can't but admire the spunk and the resilience of the Indian fan who, despite hurdles galore, finds the resolve and the determination to brave the odds and turn up at the ground, day after day, match after match. Never mind what the pundits tell us, never mind what the TV viewership studies might suggest, this Pepsi Indian Premier League is an unqualified success. Made possible as much by the quality of cricket paraded by the stars as the patronage of the Indian fan, who has faithfully put his bum on the seat and temporarily forgotten the hardships that have accompanied his journey to the cricket stadium, among other things.

Several of the grounds that have hosted IPL games this year have been far removed from the hustle and bustle of the city. That's only to be expected, especially in the newer stadia, because it's all but impossible to procure as much land as is necessary within city limits to build a modern cricket stadium with the necessary paraphernalia, including practice facilities, parking space et al. Access to a lot of the grounds is far from easy - be it in Pune where the stadium is on the national highway, or in Raipur, the newest IPL centre with the second-highest seating capacity in the country but also perhaps the farthest from the city centre of all the venues in India.

Public transport is not guaranteed, only people with connections secure car passes. In effect, the common fan is left to fend for himself. He must find ways and means of making it to the ground, and making it back closer to 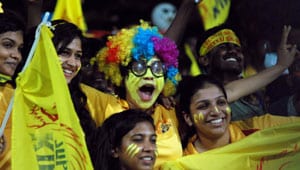 or past midnight, having ridden the emotional roller-coaster, occasionally seen himself on the giant screen, perhaps touched a ball or two if he was fortunate enough to be in the hitting arc of a Gayle, a Miller, a Raina, a Dhoni or a Rohit.

Oh, but there's more. Don't carry your mobile phone to the ground, even if you are in one of the corporate boxes. Don't carry a bag, even a wallet in some cases, definitely no coins, nor a bottle of water or a packet of crisps. Just bring yourself, man, and money, of course, if you want to quench your thirst or munch on something as you seek to soak in the entertainment.

Bizarre? Yes, and while perhaps a touch over-reactive, it is also a necessary evil in these days of touchy sensitivities and genuine security concerns. One of the reasons proffered for the early closure of pubs and bars across various major cities in the country is that the longer these watering holes remain open, the greater is the threat to law and order. It's a logic I have failed to understand because isn't it the responsibility of the police force to ensure that there is law and order, in any case? Likewise, this edict on no cell phones, no wallets, no bags. Cut out the perceived danger at the root itself, even if it is only the perceived danger.

But that has hardly been a deterrent this IPL season. Families have arrived by the dozens, little kids with their proud mothers and doting fathers, all of them waving flags and screaming 'Oh Yes Abhi' and 'RCB' or 'CSK' - depending on which team they are supporting. And 'Sa-chiiiin, Sachin' no matter what their favourite team is. It's a party atmosphere, a carnival that is worth visiting, no matter how difficult it might be getting there. Now, there is a true cricket fan.

Be it a 4.00 pm start in blazing Hyderabad or an 11.30 pm finish in the remote stadium in Raipur, most grounds have been at least four-fifths full, if not more, over the first five weeks of the 20-over extravaganza. Fears that the fans will turn their back on the administrators, who have done precious little to make cricket-watching a pleasurable experience, have remained largely unfounded. The administrators are largely apathetic because no longer are their coffers dependent on gate collection. But every cricketer worth his salt will tell you that a stadium packed to the rafters and bursting at its seams lifts him beyond words. The Indian cricket fan deserves a giant pat on the back for his continued patronage of the game of glorious uncertainties, but one suspects that unless the men who run the game express their thanksgiving through tangible means, one day even the most ardent fan will turn his back on the game he so loves and supports.

Comments
Topics mentioned in this article
Cricket IPL 2013
Get the latest updates on India vs South Africa and check out  Schedule, Results and Live Score. Like us on Facebook or follow us on Twitter for more sports updates. You can also download the NDTV Cricket app for Android or iOS.