Rohit Sharma turned anchor and interviewed man of the match, Yuzvendra Chahal, who also achieved the milestone of reaching 100 ODI wickets during the 1st ODI vs West Indies. 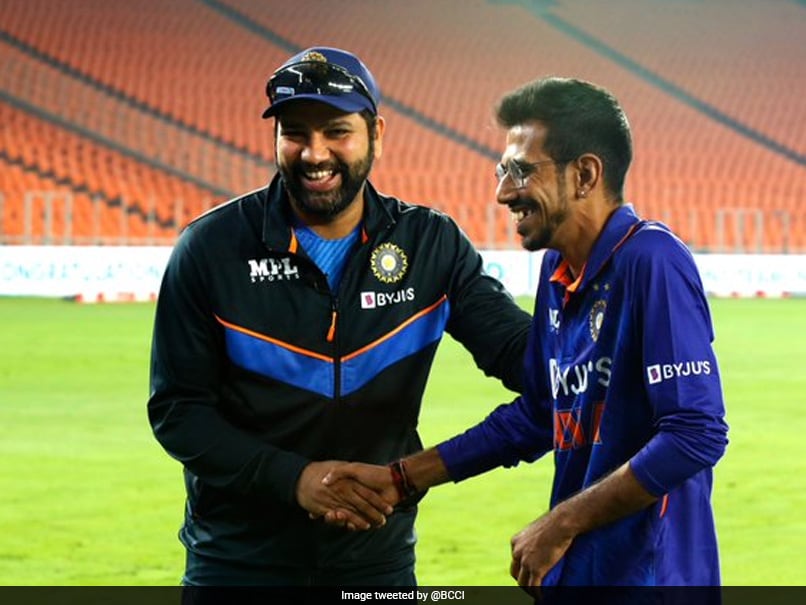 Rohit Sharma and Yuzvendra Chahal all smiles after the opening ODI vs West Indies.© BCCI/Twitter

India produced a professional all-round performance to register a comprehensive six-wicket victory over the West Indies in the opening ODI of the three-match series in Ahmedabad on Sunday. Yuzvendra Chahal was the star of the show with the ball in hand, taking four wickets for 49 runs. During India's run-chase, captain Rohit Sharma led from the front with a 51-ball 60 as India overhauled the 177-run target without much fuss. After the match, Rohit Sharma turned anchor and interviewed man of the match, Yuzvendra Chahal, who also achieved the milestone of reaching 100 ODI wickets during the game.

The BCCI shared a snippet of the entire interview on its Twitter handle:

On Rohit's question on how he felt after reaching the landmark of 100 ODI wickets, Chahal said: "It's a good feeling to take 100 wickets in any format."

Rohit then asks Chahal if he was working on something new while he was out of the team.

"When I wasn't there (in the team) I thought about what I can improve. So, I use to see other bowlers, sometimes they used to bowl sidearm," replied Chahal.

Rohit tells Chahal that "you are an important player for us, play with that mindset". The interview ends with the Indian skipper jokingly saying "auction is also coming, good luck" at which point Chahal begins laughing.

The leg-spinner became the fifth fastest Indian bowler to take 100 wickets in ODIs, reaching the landmark in his 60th game.

The list is headed by Mohammed Shami who took 100 ODI wickets in just 56 games. Jasprit Bumrah is second, achieving the feat in 57 games. Kuldeep Yadav got there in 58 matches while Irfan Pathan took 100 wickets in 59 ODIs.

India and the West Indies will now clash in the second ODI in Ahmedabad on Wednesday.

Yuzvendra Chahal India vs West Indies 2022 India vs West Indies, 1st ODI Cricket
Get the latest updates on IPL Auction 2023 and check out  IPL 2023 and Live Cricket Score. Like us on Facebook or follow us on Twitter for more sports updates. You can also download the NDTV Cricket app for Android or iOS.