India vs West Indies: With the T20I series against the West Indies won, India will now focus on the 50-over format with the first contest scheduled for Chennai on December 15. 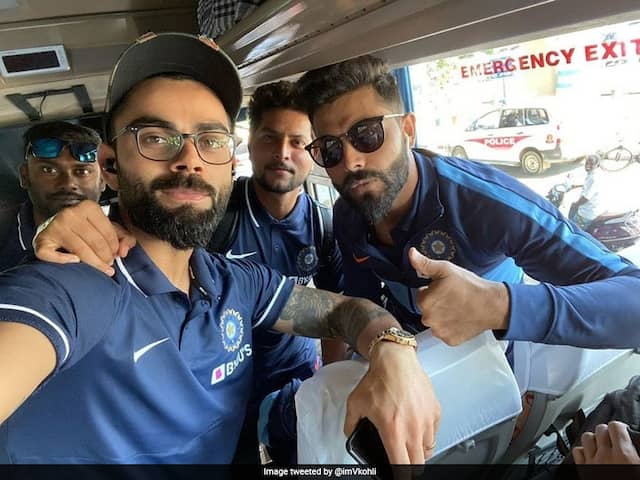 Virat Kohli and other team members reached Chennai -- the city which will play host to the first One-day International (ODI) on December 15. India skipper Virat Kohli shared a picture with teammates Ravindra Jadeja and Kuldeep Yadav on his Twitter account, informing the fans about their arrival in the city. Team India's all-round performance helped them see off the stiff West Indian challenge in the third Twenty20 International (T20I) and clinch the three-match T20I series 2-1. Quick-fire half-centuries from Rohit Sharma (71), KL Rahul (91) and Virat Kohli (70 not out) helped India post a huge total of 240/3, batting first.

Virat Kohli's unbeaten 70 came off only 29 balls as he batted at a strike rate of 241.38 -- the highest among all batsmen who played the game. Kohli's innings was laced with seven hits over the fence -- most by any player on the night.

After the match, the Indian skipper, who celebrated his second wedding anniversary on Wednesday, gifted his "special innings" to his wife Anushka Sharma.

"It was a pretty special innings and also being our second wedding anniversary, it was a special gift," Virat Kohli said at the post-match conference.

"It was a special night and one of the best innings I have played," Kohli added.

Taking about the match, the Indian bowlers took inspiration from their batsmen and joined in the party, removing the West Indies' top-order cheaply inside the powerplay to leave them reeling at 17/3 in 3.1 overs.

However, after losing the three batsmen up-front, Kieron Pollard (41 off 24 balls) and Shimron Hetmyer (68 off 39) gave the Indian bowlers some scare with their power hitting as they added 74 runs for the fourth wicket.

The first ODI will be played at Chennai's M. Chidambaram stadium and Team India touched down in the city a day after their exciting win in Mumbai.

Vizag and Cuttack will play host to the second and third ODIs on December 18 and 22 respectively.