Shivam Dube Takes On Jason Holder In Table Tennis. Watch How They Fared

India's Shivam Dube and Jason Holder of the West Indies took on each other in a Table Tennis match ahead of the third and final ODI on Sunday. 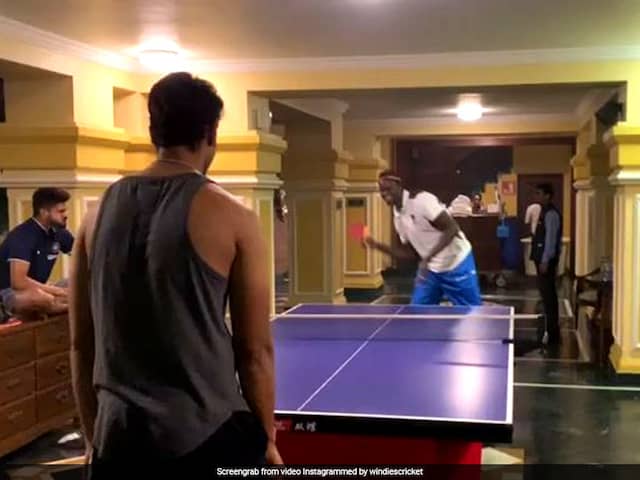 Shivam Dube and Jason Holder were seen playing Table Tennis against each other.© Instagram

India and the West Indies will lock horns in the third and final One-Day International (ODI) at the Barabati Stadium in Cuttack on Sunday but before the series decider they faced off in a different sport. India's Shivam Dube and Jason Holder of the West Indies were seen playing Table Tennis against each other with the likes of Shreyas Iyer watching the matchup between the two from the sidelines. The video of Dube and Holder playing Table Tennis was posted on the official Instagram account of West Indies Cricket.

#INDvWI Competing on and off the field ! Man In Maroon @jaseholder98 and Man In Blue @dubeshivam get some table tennis action in before the BIG ODI on Sunday!! #FridayFeeling #MenInMaroon #ItsOurGame

Sunday's clash will be the final match of West Indies tour of India. The three-match ODI series hangs in the balance with India registering a comprehensive win in the second match to draw level.

India were outplayed and had lost the opening ODI at the MA Chidambaram Stadium in Chennai by eight wickets but bounced back in style, handing the visitors a 107-run defeat at the Dr. Y.S. Rajasekhara Reddy ACA-VDCA Cricket Stadium in Visakhapatnam on December 18.

Rohit Sharma was the star of the show, blasting 159 runs off just 138 balls, including 17 fours and five sixes.

Rohit Sharma, who brought up his 28th ODI century and 7th of the year, put on 227 runs for the opening wicket with KL Rahul, who made 102, as India amassed 387/5 while batting first.

In reply, the West Indies were bowled out for 280 in 43.3 overs with Kuldeep Yadav taking a hat-trick -- his second in ODIs. Mohammed Shami too bowled well, picking up three wickets while Ravindra Jadeja took two.

India will be without the services of Deepak Chahar, who was ruled out of the final ODI due to a back injury. Young pacer Navdeep Saini replaced him in the squad but it remains to be seen if he will get a look-in.

Jason Holder Shreyas Iyer India vs West Indies 2019/20 Cricket
Get the latest Cricket news, check out the India cricket schedule, Cricket live score . Like us on Facebook or follow us on Twitter for more sports updates. You can also download the NDTV Cricket app for Android or iOS.