Amitabh Bachchan recreated a famous dialogue from the movie 'Amar Akbar Anthony' after Virat Kohli led India to a memorable win over the West Indies. 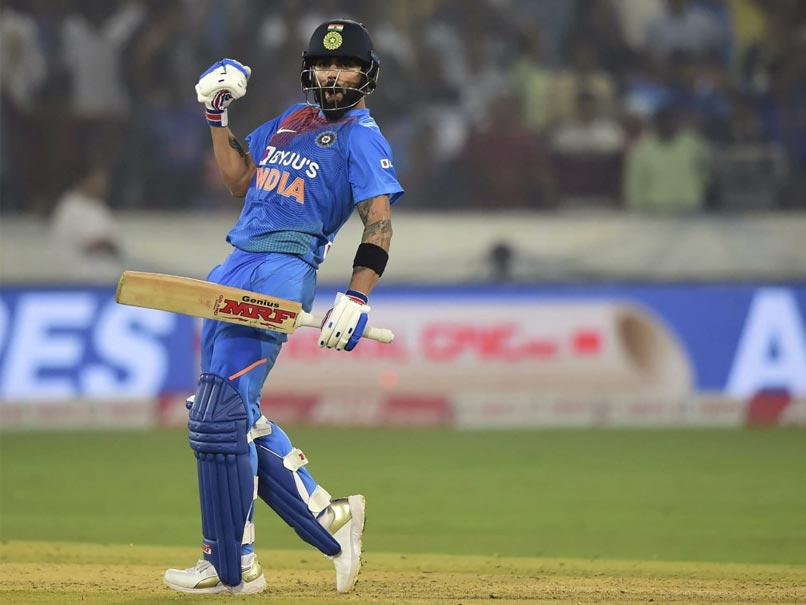 Virat Kohli produced a batting masterclass to blow away the West Indies and deny the visitors a famous victory in the first Twenty20 International (T20I) of the three-match series in Hyderabad on Friday. The Indian captain smashed an unbeaten 94 off 50 balls as India chased down the 208-run target set by the West Indies with six wickets remaining and eight balls to spare. During the superlative knock, Kohli even mocked Kesrick Williams by imitating his "notebook" celebration after hitting him for a six. In reaction to Kohli's match-winning knock and the his mock celebration, Bollywood superstar Amitabh Bachchan took to Twitter to recreate his famous dialogue from the blockbuster 'Amar Akbar Anthony'.

Virat Kohli thanked Amitabh Bachchan for his post, saying the legendary actor was "always an inspiration".

Haha love the dialogue Sir. You're always an inspiration.

However, it was not all plain sailing for Virat Kohli and his team in the series opener. India had won the toss and put the West Indies into bat. The hosts immediately made an impact with Deepak Chahar striking in the second over to remove Lendl Simmons.

Evin Lewis (40) and Brandon King (31) steadied the ship and sent West Indies on their way thanks to some clean hitting. Shimron Hetmyer hit 56 off 41 balls while captain Kieron Pollard blasted a 19-ball 37 as the Indian bowlers failed to make their mark.

The bowlers were not helped by the fielders with some dismal efforts, including dropped catches, costing India dear.

Jason Holder came in and smashed an unbeaten 24 off 9 balls to power the West Indies past 200.

India's chase got off to a poor start as Rohit Sharma (8) registered a rare failure. But KL Rahul and Virat Kohli strung together a 100-run partnership for the second wicket to keep India in the hunt.

Rahul hit 62 off 40 balls to stake his claim for the opening slot for the T20 World Cup. However, after Rahul's departure, India lost Rishabh Pant and Shreyas Iyer cheaply and it was left on Virat Kohli to get India across the line.

The skipper rose to the occasion, like he has done numerous times in the past, smashing six fours and as many sixes in total to record his career-best T20I score and give India a 1-0 series lead in the three-match series.

Shimron Hetmyer India vs West Indies 2019/20 Cricket
Get the latest updates on ICC Women's Cricket World Cup 2022 and IPL 2022, check out the Schedule , Live Score and IPL Points Table. Like us on Facebook or follow us on Twitter for more sports updates. You can also download the NDTV Cricket app for Android or iOS.