Kuldeep Yadav took three for 13 as he rattled the Windies middle order in the first T20I in Kolkata. 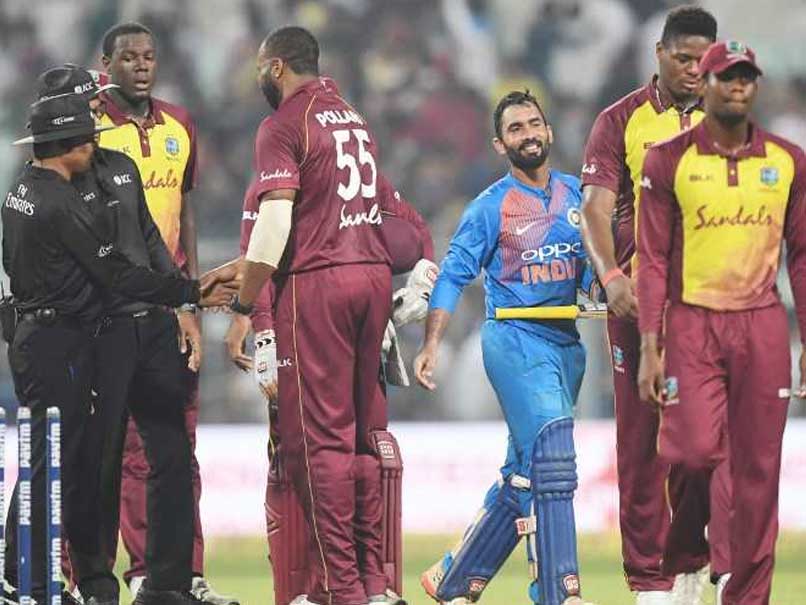 Dinesh Karthik played a crucial 31-run knock against the Windies in the first T20I.© AFP

Experienced Dinesh Karthik played a superb 31-run knock to take India to a five-wicket win against the Windies in the first Twenty20 international (T20I) at the Eden Gardens in Kolkata on Sunday. Debutant Krunal Pandya provided terrific support to Karthik from the other end as India won with 13 balls to spare. Chasing a paltry 110-run target, India suffered a rare top-order collapse, losing Rohit Sharma in the first over, after which Shikhar Dhawan walked back to the pavilion. Then Karthik enforced a 38-run partnership with Manish Pandey to bring the Indian chase back to its feet. After Pandey's departure, Karthik batted responsibly with Krunal Pandya to help India go one up in the T20I series.

Earlier, spinner Kuldeep Yadav starred with the ball as the tourists struggled with the bat yet again on the tour.

Yadav registered figures of 3-13 with his left-arm wrist spin as West Indies managed just 109-8, their lowest T20I total against India, after being invited to bat first.

"Exceptional performance with the ball. Was a lot on offer for the seamers. Even with spinners, it wasn't easy. Overall there was little bit for every department," skipper Rohit Sharma said after the win.

"To start with, we bowled well -- good areas. Used the conditions perfectly. Knew the chase wasn't going to be easy. Hopefully we can learn from these mistakes."

Debutant fast bowler Oshane Thomas removed the openers with just 16 runs on the board to give his team hope of defending their modest total.

Thomas got Sharma caught behind for six to pick his first T20 scalp and then bowled the left-handed Shikhar Dhawan for three.

Skipper Carlos Brathwaite stepped in to get two more batsmen trudging back to the pavilion as India slipped to 45-4.

"Oshane Thomas is a really exciting talent without doubt, good height plus that jump he takes, if he bowls in the right areas, it won't be easy for any batsman in the world to counter that," Sharma said of the 21-year-old Thomas.

Debutant Krunal Pandya had a memorable debut after he hit the winning runs on his way to an unbeaten 21. He also picked up a wicket in the West Indies innings.

But it was Yadav who led an inspirational bowling attack that made West Indies lose their top five batsmen inside 11 overs.

Pandya got the big-hitting Kieron Pollard out for 14 with his left-arm spin to celebrate his maiden international wicket.

Kuldeep soon took over to get three key wickets including Brathwaite for four.

Fabien Allen hit a 20-ball 27 in his first T20 game for the West Indies before falling to another debutant Khaleel Ahmed.

It was Ahmed's first T20 wicket after the 20-year-old made an impression in India's 3-1 triumph over the visitors in the one-day internationals.

The tourists had suffered similar batting collapses in the Test series, which they lost 2-0, and in the ODIs. They were skittled out for 104, their lowest ODI total against India in the final match.

"I don't think we applied ourselves. We were either too defensive or too attacking. We could've scored 130-140, which would've been a winning total," said Brathwaite.

"As young bunch of guys, we want to be fearless."

The second T20 is in the north Indian city of Lucknow on Tuesday.

Eden Gardens India vs West Indies 2018 Cricket India vs West Indies, 1st T20I
Get the latest updates on IPL Auction 2023 and check out  IPL 2023 and Live Cricket Score. Like us on Facebook or follow us on Twitter for more sports updates. You can also download the NDTV Cricket app for Android or iOS.