Watch: Hardik Pandya Has An Adorable Message For Brother Krunal On His T20I Debut 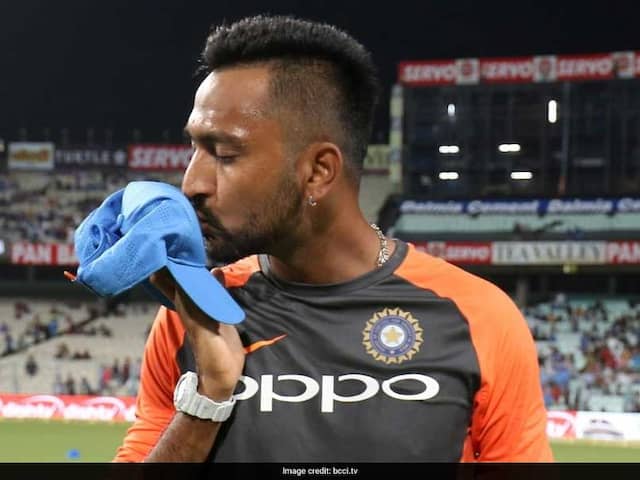 Brothers Hardik and Krunal Pandya usually hog the limelight while representing the Mumbai Indians in the Indian Premier League (IPL). Both of them are key members of the Mumbai-based IPL outfit as they were picked for their slogging and crucial wicket-taking abilities. On Sunday, when Krunal Pandya earned his maiden T20I cap for the national team to play against the Windies at the Eden Gardens in Kolkata, an elated Hardik Pandya took to Instagram to wish his brother on the achievement.

Hardik, who is still recovering from an injury he sustained during the Asia Cup 2018 said, "Well done my boy, this is what we dreamt of, lot's of love, lot's of love from my side."

This is what we've dreamed of big bro @krunalpandya_official

However, Hardik also said that he misses playing for India but feels happy to see his brother's inclusion in the side. Apart from Krunal Pandya, fast bowler Khaleel Ahmed, too, earned his cap for the shortest format of the game.

It's a proud moment for @krunalpandya24 and Khaleel Ahmed as they are all set to make their T20I debut for #TeamIndia pic.twitter.com/l4Ovn8u5eC

Krunal Pandya made an early blunder at the start of his T20I career as he fumbled at the boundary while attempting to concede four runs in the first over of the match against the Windies at the Eden Gardens.

Krunal averages 26.86 in the T20s from 62 matches. He has a highest score of 86 runs with two half-centuries to his name.

West Indies Cricket Team India vs West Indies 2018 Krunal Pandya Cricket
Get the latest Cricket news, check out the India cricket schedule, Cricket live score . Like us on Facebook or follow us on Twitter for more sports updates. You can also download the NDTV Cricket app for Android or iOS.