India will be fielding three new faces in the T20I squad. 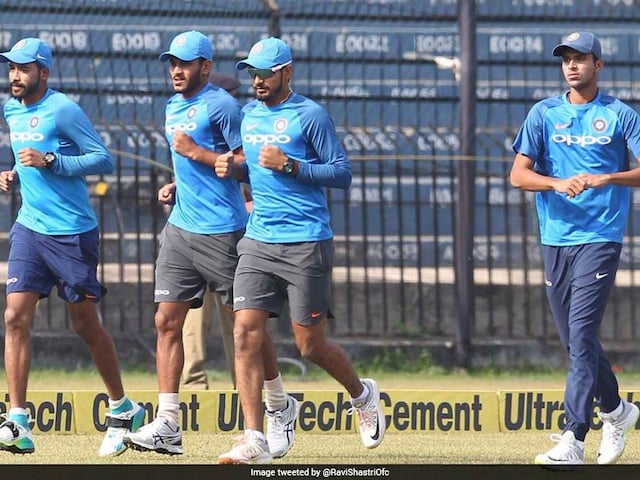 Rohit Sharma-led Team India is gearing up for the three-match Twenty20 International series against Sri Lanka commencing on December 20. The first match will be played at Barabati Stadium, Cuttack. Ahead of the clash, the Jasprit Bumrah-led Indian pace attack, comprising of Mohammad Siraj, Basil Thampi and Jaydev Unadkat, is all fired up and will aim to cement their place in the team. While Jaydev Unadkat has one T20 to his name, which he played against Zimbabwe in June last year, India will feature three first-timers in form of Washington Sundar, Basil Thampi and Deepak Hooda.

In a video uploaded by the Board of Control for Cricket in India (BCCI) on Twitter, which is captioned as, "Say hello to our new pace attack comprising @JUnadkat, Mohammed Siraj and Basil Thampi," the Indian pacers can be seen warming up under the watchful eyes of head coach Ravi Shastri.

After wrapping up the ODI series 2-1, the Men in Blue will aim to repeat their dominating T20 performance in Sri Lanka. However, the shortest format of the game is a different ball game and the hosts would look for a smooth transition.

India do not have a happy memory of the solitary T20I that they played at the Barabati Stadium when they were folded for 92 against South Africa in 2015 as crowd trouble brought infamy to the venue.

On head-to-head count, India lead Sri Lanka 7-4 and are yet to lose against them in the last four outings. And keeping the Dharamsala batting disaster in mind, the hosts will aim to give a better account of their batting.