With Sri Lanka taking a 1-0 lead, India's chances of grabbing the No.1 spot in the ICC ODI rankings is pretty minimal. 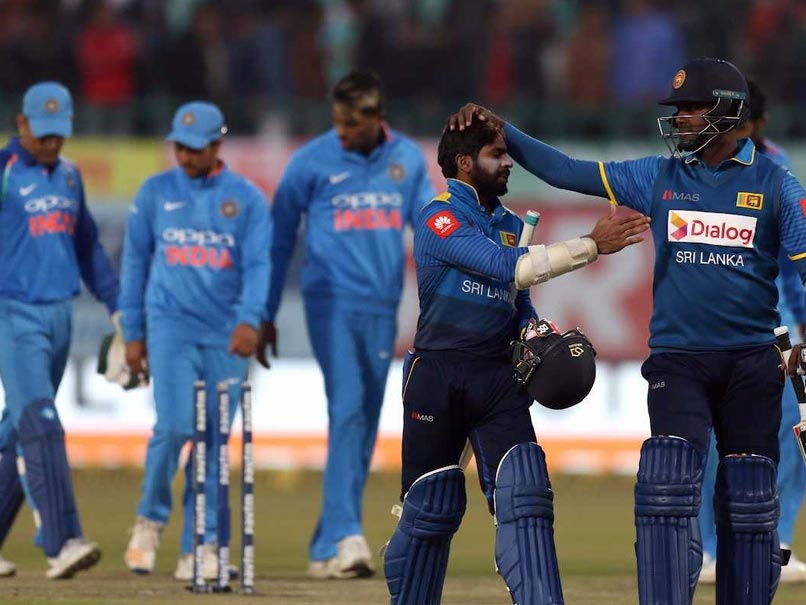 Sri Lanka displayed an all-round performance to trounce the in-form Indian side by seven wickets to lead the three-match One-Day International (ODI) series 1-0. Chasing 113 for victory, the Lankan Lions rode on Upul Tharanga's 49 off 46 balls to achieve the target in just 20.4 overs. Indian pacers, Bhuvneshwar Kumar and Jasprit Bumrah, struck early to give the hosts some hope but were negated by an unbeaten 49-run partnership between Angelo Mathews (25) and Niroshan Dickwella (26), which helped the visitors get across the victory line. Earlier, Sri Lanka captain won a crucial toss as the visitors put in a brilliant bowling performance to bundle out India for a paltry 112 in 38.4 overs. Suranga Lakmal, who achieved his career best figures of 4 for 13, shone with the ball and was ably supported by Nuwan Pradeep (2/37) and Angelo Mathews (1/8).

Courtesy some disciplined Lankan bowling, the Men in Blue were at one time reduced to 29/7 and were on the verge of registering their lowest ever ODI score.

However, former skipper Mahendra Singh Dhoni stood tall and steadied the Indian ship as he scored a patient 65 off 87, which helped his team cross the 100-run mark. During his innings, Dhoni hit 10 boundaries and two sixes.

Interestingly, India's lowest score of 54 had come against Sri Lanka in Sharjah back in 2000.

Dhoni, along with Kuldeep Yadav (19) stitched together a crucial 41-run partnership to bring India back in the game.

With Sri Lanka taking a 1-0 lead, India's chances of grabbing the No.1 spot in the ICC ODI rankings is pretty minimal.

With skipper Virat Kohli taking a break, the Indian top-order did not cover itself in glory as the likes of Shikhar Dhawan, Rohit, Shreyas Iyer, Dinesh Karthik looked all at sea against the moving ball.

While most of the batsmen are not Test regulars, the performance does raise questions about Indian team's ability to counter seam and swing.

It was the second time on the current tour after the Eden Gardens Test that Indian team's ability was put to test and they again came a cropper.

Put into bat, Indian batsmen looked clueless as Lakmal, Pradeep and Mathews with half of the Indian batting line-up was gone for just 16 runs and at one stage.

Such was the dominance of the Lankan seamers that India scored 11 for 3 in the powerplay overs, the lowest 10-over score in an ODI in the last five years, and second-lowest overall.

Sri Lanka put India on the backfoot right from the start with Mathews trapping opener Shikhar Dhawan in front of wicket in the last ball of his first over. The on-field umpire had given not out before a review by Sri Lankan team showed that the ball had hit him on line.

Lakmal produced some extra bounce with his away going deliveries and Rohit ended up poking at the ball to be back to the pavillion after the third umpire overturned another not out decision.

With India tottering at 2-2, Karthik joined debutant Iyer in the middle. After four maiden overs in the first five overs, Iyer finally hit the first four and also got off the mark when he guided a Mathews delivery to the mid-wicket boundary.

Living dangerously on the other end, Karthik was then sent back to the hut by Lakmal as India ended the powerplay overs at 11 for 3. Pradeep replaced Mathews even as Perera persisted with Lakmal and it worked as the pacer produced a superb delivery to induce a thick outside edge off Manish Pandey as India slumped to 16-4.

Two balls later, Pradeep uprooted Iyer's stumps when the debutant inside-edged a delivery onto the stumps as the hosts lost half their side in the 14th over. Pandya then hit a couple of boundaries before giving an outside edge to Pradeep.

Bhuvneshwar Kumar could not stay for long and it was left to Dhoni and Yadav to avoid the ignominy of being bowled out for their lowest ODI total of 54 against the same opponent in 2000 at Sharjah.