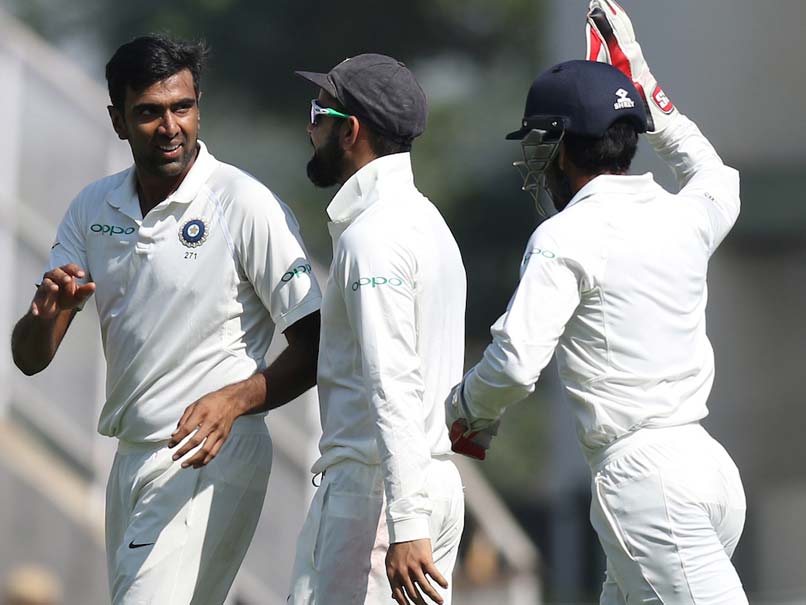 Ravichandran Ashwin celebrates after taking a wicket on Day 4 of the 2nd Test.© BCCI

Ravichandran Ashwin added another landmark to his impressive career as he claimed his 300th Test wicket during the second Test against Sri Lanka at the Vidarbha Cricket Association Stadium in Nagpur on Monday. The off-spinner achieved the feat in his 54th Test, beating the record of the legendary Australia fast bowler Dennis Lillee, who had reached the distinction in 56 matches. Ashwin claimed the wickets of Dasun Shanaka, Dilruwan Perera, Rangana Herath and Lahiru Gamage on the fourth day of the Test as India notched up a massive innings and 239-run win to lead the series 1-0.

Ashwin had also beaten Lillee to the 250-wicket milestone when he had got there in 45 Tests, as opposed to 48 by the Australian.

300th Test wicket for @ashwinravi99 and #TeamIndia take a 1-0 lead in the 3-match Test series. India seal the 2nd Test in Nagpur by an innings and 239 runs #INDvSL pic.twitter.com/mq56alEczD

Ashwin has been on the sidelines of the Indian limited-overs side of late, with the likes of left-arm chinaman bowler Kuldeep Yadav and leg-spinner Yuzvendra Chahal keeping the veteran offie and Ravindra Jadeja out of reckoning.

Even after this record, Ashwin will most likely have to fight for a spot in the playing XI when India head for South Africa for their first overseas tour in a long time.

India captain Virat Kohli had made it clear ahead of the Nagpur Test that he couldn't guarantee permanent first XI slots for Ashwin and Jadeja when the team travels to South Africa, where in all probability, a single spinner will be in operation.

"I can't commit to that 100 per cent when we play abroad that we will be playing with two spinners, to be honest. It is because we need to have a look at the balance of the side as well. Obviously, those two guys with their batting abilities are both contenders to start a Test match depending upon the batsmen we are up against in the opposition," Kohli said.

Comments
Topics mentioned in this article
India Cricket Team Sri Lanka Cricket Team Ravichandran Ashwin Dennis Keith Lillee India vs Sri Lanka 2017-18 Cricket
Get the latest updates on ICC T20 Worldcup 2022 and CWG 2022 check out the Schedule, Live Score and Medals Tally. Like us on Facebook or follow us on Twitter for more sports updates. You can also download the NDTV Cricket app for Android or iOS.