Kohli was at his aggressive best in the just-concluded second Test against Sri Lanka as he smashed a strokeful 213 off 267 balls to help India amass a huge first innings total. 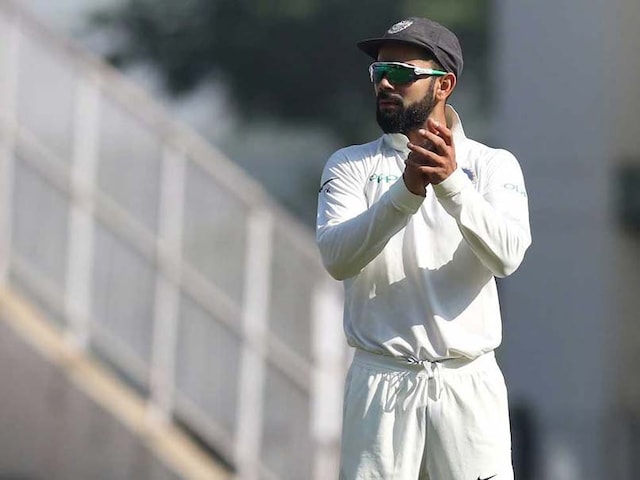 India captain Virat Kohli on Monday said that his team has to be aggressive in their approach to produce results in their gruelling tour of South Africa up ahead. Kohli was at his aggressive best in the just-concluded second Test against Sri Lanka as he smashed a strokeful 213 off 267 balls to help India amass a huge first innings total. Kohli's knock and centuries from Murali Vijay, Cheteshwar Pujara and Rohit Sharma ensured that India had ample time in their hands to bowl Sri Lanka out for a massive innings and 239 runs win in the just-concluded Test. "I just wanted to bat the way I bat. Get into good positions and rotate strike and score quickly so our bowlers have time to bowl the opposition out," Kohli said at the post-match presentation ceremony. "We will need that (approach) overseas so I was looking at doing that.

"I always wanted to better myself in scoring big hundreds for the simple reason that the team benefits. When you lose concentration after a hundred, maybe two wickets can fall quickly. A set batsman can play shots easier than a new batsman so I started thinking in that way and my fitness helps me bat for longer periods," he added.

Pujara has been a consistent performer for India in Test matches, but it was heartening to see the return of Vijay and Rohit, both of whom smashed tons to give Kohli a happy selection headache for the upcoming matches.

"Pujara we know, he's been very consistent. Vijay was playing after a while, he takes pride in playing Test cricket. I know it hurt him to be out and he came back really well.

"Rohit as well, making a strong case for himself in the future. He will always be there when we speak about combinations. We have a lot of Test cricket coming up," said Kohli, who was effusive in his praise for the trio. The Indian skipper also had words of appreciation for his bowling unit, especially the pacers.

"Bhuvi (Bhuvneshwar Kumar) has played a lot of cricket for India in the last few months. Ishant (Sharma), (Mohammad) Shami and Umesh (Yadav) did not play so much. But they bowled a lot of overs in first-class cricket and they always say that's important for rhythm," Kohli said.

"Even on this pitch, they were excellent. Although the spinners did a good job for us, Ishant was the standout bowler." Kohli, who was adjudged man-of-the-match for his record breaking double ton, reiterated that with no time in hand, the team is taking the ongoing series against Sri Lanka as a preparation for the tour of South Africa.

"We would like to think we want to prepare for South Africa. That's why we asked for pitches with help for the fast bowlers. This one (Nagpur) deteriorated by the second day. But Kolkata was the ideal wicket," he said referring to the trip starting December 27.

"There's not enough time in between to prepare so we have to use the time we have now for a big tour coming up." Sri Lanka captain Dinesh Chandimal was at a loss of words when asked to analyse his team's shoddy performance in the match.

Chandimal blamed his batsmen and said they need to put up big totals in first innings in order to stand a chance against a team like India. "It was a good toss to win. Unfortunately, we were outplayed from the first day of the game. Our batting unit let us down again. You have to score at least 350 plus against India to win or even stay in it for five days," Chandimal said.

"Before we came here, we had a gameplan. Then we said to the guys, if you get a start, you have to bat long. But they scored only 50-60 runs and got out. It's unfortunate but I'm sure they will learn."

Chandimal said seniors players like Angelo Mathews needs to step up and set example for the younger guys. "Angelo is the one who is the most senior guy in the line-up. And if he is not scoring, our team goes down. As senior players you need to stand up and perform so the youngsters can follow. I'm sure he will stand up and make it count again," the visiting captain said.

Comments
Topics mentioned in this article
Sri Lanka Women India Cricket Team India vs Sri Lanka 2017-18 Virat Kohli Cricket
Get the latest Cricket news, check out the India cricket schedule, Cricket live score . Like us on Facebook or follow us on Twitter for more sports updates. You can also download the NDTV Cricket app for Android or iOS.