"It is unfair for any fielder willfully to attempt, by word or action, to distract, deceive or obstruct either batsman after the striker has received the ball," reads ICC's Law 41.5. The cameras caught Virat Kohli holding up his hand to signal to the umpire for a 5-run penalty. 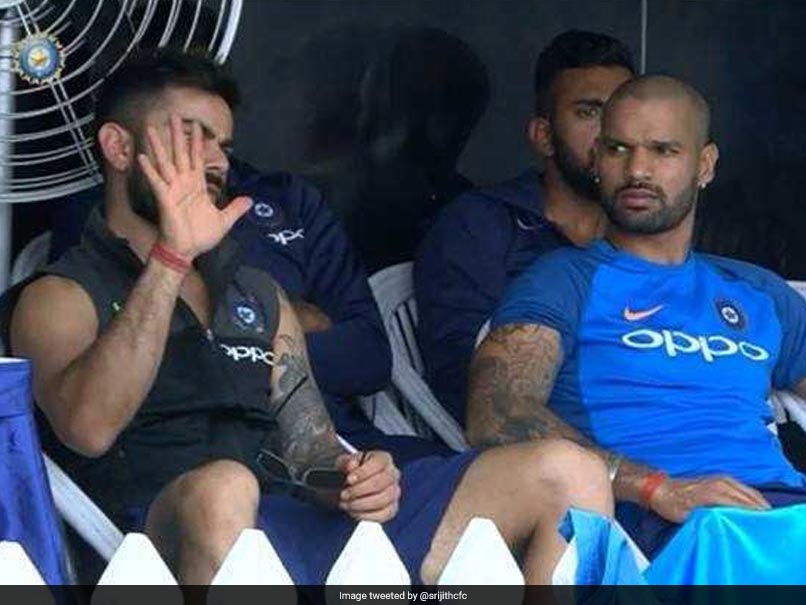 Virat Kohli was seen signaling to the on-field umpires to penalise the Sri Lankans.© Twitter

India captain Virat Kohli on Saturday was left annoyed after on field umpires Nigel Llong and Joel Wilson decided against penalising Sri Lanka captain Dinesh Chandimal under the International Cricket Council's fake-fielding law. The incident occurred on the fourth ball of the 53rd over of India's 1st innings in the Eden Gardens Test. Chandimal, who was chasing the ball played through the covers by Bhuvneshwar Kumar, slid despite being nowhere near the ball. As he picked himself up from the ground, Chandimal even pretended to throw the ball to the wicketkeeper. Kohli was convinced about Chandimal being guilty under the new ICC rule. However, the umpires felt otherwise.

"It is unfair for any fielder willfully to attempt, by word or action, to distract, deceive or obstruct either batsman after the striker has received the ball," reads ICC's Law 41.5. The cameras caught Kohli holding up his hand to signal to the umpire for a 5-run penalty.

Kohli is not happy after seing the fake fielding pic.twitter.com/5tXWZPtNA2

Fans backed the Indian captain for making his displeasure known to the umpires.

Virat Kohli noticed that fake fielding and signaling he wants 5 penalty runs in the camera from the dressing room. What an active captain he is ?? You can't simply escape from him! #INDvSL #INDvsSL

Chandimal has potentially come up with a talking point for the day, and Kohli wants five runs #fakefielding #INDvSL

Lahiru Thirimanne (51) and Angelo Mathews (52) struck half-centuries after Sri Lanka bowled out India for a meagre 172 as the visitors closed in on a first innings lead. When the bad light forced early stumps on the third day, Sri Lanka were 165 for four, trailing by seven runs, with Chandimal (13) and Niroshan Dickwella (14) at the crease.

India resumed at a precarious 74 for five and managed to add 98 more runs to their overnight total, which was their second lowest score against Sri Lanka at home. It is only the second time the Islanders have dismissed India in their own den below 200, after the hosts were dismissed for 167 in Chennai in December 2005.

Comments
Topics mentioned in this article
India Cricket Team Sri Lanka Cricket Team Cricket Eden Gardens India vs Sri Lanka 2017-18 Virat Kohli
Get the latest updates on ICC T20 Worldcup 2022, check out the Schedule and Live Score. Like us on Facebook or follow us on Twitter for more sports updates. You can also download the NDTV Cricket app for Android or iOS.