India vs Sri Lanka, 1st ODI: MS Dhoni Asks For Review Even Before Umpire Raises Finger, Gets It Bang On 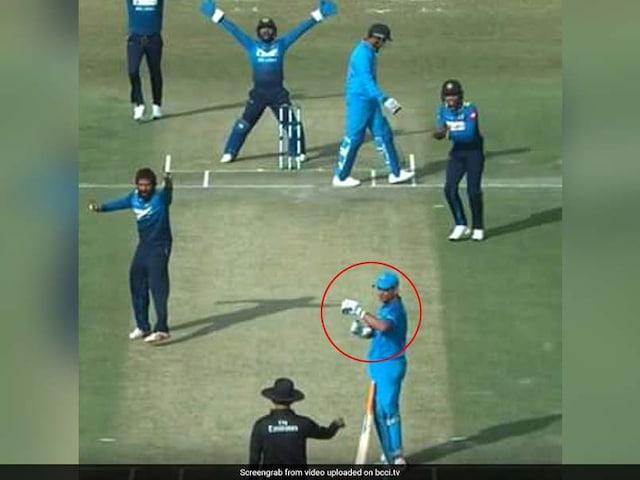 MS Dhoni mostly gets most of his DRS reviews right.© BCCI

Former India captain MS Dhoni on Sunday maintained his hugely impressive record of reviewing decisions correctly on the Decision Review System. During India's 1st ODI against Sri Lanka in Dharamsala, Dhoni opted for a review that left fans awestruck because he signaled the same to the umpire even before he could raise his finger to give his decision. The incident occurred in the 33rd over of India's innings, when Jasprit Bumrah was rapped on the pads with a delivery from Sachith Pathirana. The Sri Lankans immediately went up and the umpire was convinced about Bumrah being out leg before. Most Indian cricketers struggle with the DRS, but not Dhoni.

The umpire had to reverse his decision after the TV replays showed impact was outside the line. Indian fans, inside and outside the stadium, couldn't stop marveling at Dhoni's awareness and game sense.

The review for Bhumrah just now, proved once again, why is #MSD such an asset even now!

It's high time to change DRS from Decision Review System to Dhoni Review System!!!!!
How can a man be this accurate... #MSDhoni for a reason!!!

Suranga Lakmal rattled the Indian batting during his extended spell of 10 overs as India collapsed to 29-7 before Dhoni fought back with a gritty 65 to take the total past 100.

With India in danger of being bowled out for an historic low -- Zimbabwe's 35 in 2004 versus Sri Lanka is the all-time record -- Dhoni put on a crucial 41-run partnership with Kuldeep Yadav for the eighth wicket.

The pair took India past 54, their own lowest total, which was set against Sri Lanka in 2000.