India vs South Africa: Tabraiz Shamsi came up with a hilarious caption for a picture he shared along with Shreyas Iyer. 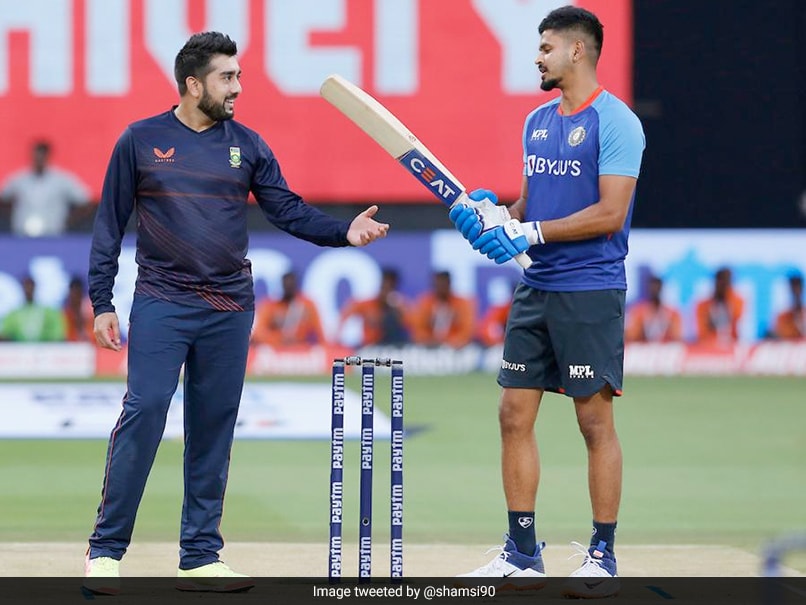 South Africa spinner Tabraiz Shamsi took to Twitter on Tuesday to share a picture of him with India batter Shreyas Iyer from a pre-match training session and came up with an epic caption. In the picture, Shamsi can be seen chatting with Shreyas, who has his bat in hand. "Asked @ShreyasIyer15 for his bat before the game so he could stop hitting me for 6s haha," Shamsi captioned the picture, before going on to add "you definitely won this round bud!"

Asked @ShreyasIyer15 for his bat before the game so he could stop hitting me for 6s haha ...you definitely won this round bud!

I'll be back... better prepared... and ready to do battle with you again pic.twitter.com/Hio2ozLsT2

He said, however, that he would be better prepared to face the Kolkata Knight Riders skipper when they came up against each other the next time.

"I'll be back... better prepared... and ready to do battle with you again," he wrote in his tweet.

Shamsi did not have the best of returns during the five-match T20I series between India and South Africa.

Shreyas, meanwhile, was not at his best either, scoring just 96 runs in the five innings he played.

He started well, with knocks of 36 and 40, but couldn't deliver in the next two matches. He faced just one delivery in the 5th T20I before the match was abandoned due to rain in Bengaluru.

The left-arm wrist-spinner managed to take just one wicket in four matches and conceded 102 runs in the 10 overs that he bowled.

The series ended in a draw, with South Africa winning the first two matches and India coming back strong in the third and fourth games.

Comments
Topics mentioned in this article
India vs South Africa 2022

Tabraiz Shamsi Cricket
Get the latest updates on Fifa Worldcup 2022 and check out  Fifa World Cup Schedule, Stats and Live Cricket Score. Like us on Facebook or follow us on Twitter for more sports updates. You can also download the NDTV Cricket app for Android or iOS.