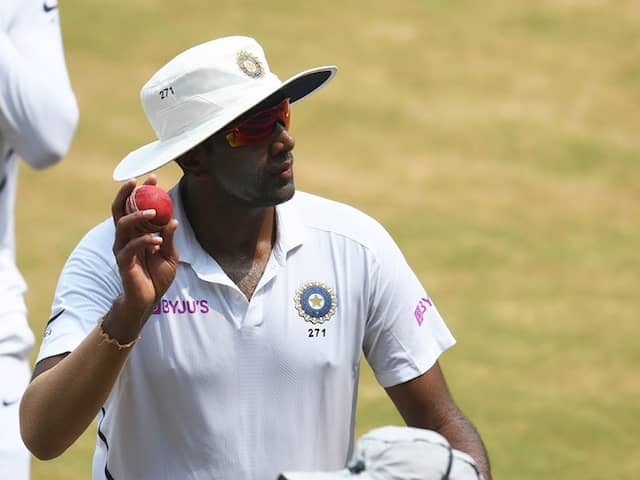 Ravichandran Ashwin picked up eight wickets in the first Test against South Africa in Vizag.© AFP

Ravichandran Ashwin on Sunday joined Muttiah Muralitharan in being the fastest to get to 350 Test wickets. Ashwin took one wicket on Day 5 of the first Test between South Africa and India in Vizag and he had taken seven in the first innings of the series opener. It is the first time in nearly a year that Ashwin was playing for India having been dropped for the entirety of the West Indies tour. Ashwin had spoken of how he struggled to cope with days when he was not part of the team.

In an interview with fielding coach R Sridhar that was put up on the Board of Control For Cricket in India's website, he said that he does not aim for milestones and instead concentrates on being in the best mind space before a match.

"Obviously these things happen over a period of time and you can't plan these things. I have been very lucky in terms of where I have got in my career in terms of racing up with all these records. It's important to stick to the process every single day, try and stick to the basics, keep it as simple as possible because that's what makes it easier for you every time you get in the next game," he said.

"When it comes to my skill, I want to be as prepared as possible and try and tick all the boxes before a game. Try and be in the best possible mental space and the physical space getting into that particular match. All these are things that I play inside my head and be as prepared as possible getting into a game. But with regards to how I go about my work, how I don't want to chase anything. I want to keep it very simple. That's what I have learned over the last year."

Ashwin said that his maiden Test wicket will always hold a special place but there are a few others up there in the list.

"There have been a lot of special wickets. I will just pick a few. Probably, my first Test wicket of Darren Bravo will always be special. I have dismissed David Warner a few times. But, I would say amongst the 300 I have taken so far, Warner's wicket in Bangalore on Day 2 morning is one of the special. Not to forget the AB de Villiers' wicket in Nagpur in 2015," he concluded.

David Warner India vs South Africa, 2019 Cricket
Get the latest Cricket news, check out the India cricket schedule, Cricket live score . Like us on Facebook or follow us on Twitter for more sports updates. You can also download the NDTV Cricket app for Android or iOS.