Yuvraj Singh will play cricket again, come September, but the champion cricketer says he feels like he will play his first match for India. 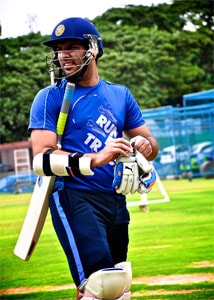 Yuvraj Singh will play cricket again, come September, but the champion cricketer says he feels like he will play his first match for India.

The ace batsman has recovered from a nine-month long battle with cancer and was declared fit to play by BCCI (Board of Control for Cricket in India) doctors yesterday. Today, the national selectors picked him in the 15-member squad for two T20 matches to be played at home against New Zealand on September 8 and September 11 and for the ICC T20 World Cup beginning on September 18 in Sri Lanka.

And the Man of the Moment is ecstatic. "Can't explain how I feel ! Feels like I'm going to play for india for the first time!want to thank a lot of people. Specially bcci and selectors for showing their faith in me my friends and family my fans and media ! It's a special day for me," Yuvraj posted on Twitter.Â  (Read: Yuvraj's tweets)

He later spoke to media and said: "I always believed I'd come back. I'm going to give it my best and try winning matches for India. After the 2011 World Cup, I have not really played any ODI or T20. Everybody is just happy that I am back."

When asked if he is match fit, Yuvi said: "I will be playing a few practice matches in Bangalore. And then will play two matches against New Zealand. So I will be prepared for the World T20."

"Apart from physical fitness, I needed to have mental fitness. I am confident I will be 100% fit when I play," he added.

He also said his body may not be prepared for longer versions of the game as of now. "I don't think I am prepared for Test cricket because it will be too tough on my body. 50-over game and Tests are tougher on the body. Starting with the T20 format is ideal for me," he said.

Yuvraj also hailed friend and teammate Harbhajan Singh's selection. "Harbhajan and I have been playing since we were kids. Like me, even he struggled in the last one year. I am happy he's back. I hope we both do well," Yuvi said.

Earlier, Sports Minister Ajay Maken also welcomed Yuvraj's selection and tweeted: "Yuvraj Singh is a fighter! His comeback story will not only inspire the team but motivate sportpersons in their moments of despair & gloom!"

Yuvraj was the man of series of the 2011 World Cup; he had a spectacular stint with both bat and ball as India recorded a historic win, lifting the coveted cup after 29 years on April 2 last year. But trouble with health had begun. Yuvraj last played in two of three home Tests against the West Indies in November 2011. He was diagnosed with a rare germ cell cancer and went to Boston, USA, for treatment, where he had three sessions of chemotherapy.

"Yuvraj has been declared fit, so he makes a comeback. And all of us know, if he gets going, he can singlehandedly win matches. He is a crucial factor. We are very happy Yuvraj is back. We appreciate the kind of effort he has put," said K Srikkanth, Chairman of Selectors.

In the US, Yuvraj was visited by friends like Anil Kumble and Ranvijay Singh and posted pictures and regular updates about how he was faring on social networking site Twitter. He said then that he drew immense courage from the experience and struggle with testicular cancer of cyclist Lance Armstrong; the champion cyclist wrote Yuvraj a letter in which he said, "Yuvi, I want you to know that the entire LIVESTRONG team is here for you. We say it all the time, and truly believe in it: Knowledge is Power, Unity is Strength, and Attitude is Everything. Please know that we are here to help you and your family in any way possible. Go Yuvi!! Livestrong."

Yuvraj was declared free of cancer on February 14 and returned to India on April 9 this year. He promised to be back on the cricket field soon.

Focused on making that comeback he began working hard on regaining body strength, sapped considerably by the chemotherapy. Yuvi played his first cricket match last week - a first class game for KSCA XI against India Colts. He scored 47 runs and bowled a few overs as well.