By performing well in his comeback game post a serious illness, Yuvraj Singh can afford to be his normal self as the pressure is now off his head, says India skipper Mahendra Singh Dhoni. 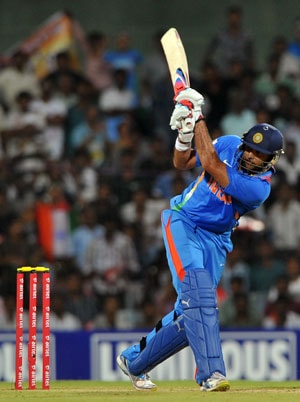 By performing well in his comeback game post a serious illness, Yuvraj Singh can afford to be his normal self as the pressure is now off his head, says India skipper Mahendra Singh Dhoni.

"From tomorrow, he can do whatever he wants to. It's just about giving that individual a bit of space so that he can think about what he needs to do. Especially given that he is playing after 10 months, you will put pressure on him because he doesn't know where he stands. Now that he has done well, he can do whatever he wants," Dhoni said after a narrow one-run defeat.

Dhoni said Yuvraj apart from his batting, gives the side a good balance by contributing with his spin bowling.

"It was a big game for him. All the eyes were on him. It was good to see him on the field. I personally feel that he gives us the right kind of balance we need.

"Of course he is not someone who will bowl all four overs in a T20 game but I can use his variations. If you see our bowling line up, we have to play with four specialist bowlers and the fifth bowler will be all these part timers," he said.

Dhoni said a player may have to encounter such problems but the key was to forget it when you enter the field.

"Once you go onto the field you don't think about all these things. I have always believed that if some of these things happen, you should try to keep it simple. You will get in and play big knocks. We all know his batting is among the best in the world so I am really happy for him."

Talking about the defeat, the skipper said it was disappointing but they have taken a lot of positives from it like the fast bowlers doing well and the good form of young guns such as Virat Kohli.

Dhoni said the way Balaji bowled towards the end was a good sign for India ahead of the World Twenty20 in Sri Lanka.

"As far as the team's mood is concerned, quite disappointed with the loss but lots of positives from this game. The match didn't go exactly go according to the plan. But I think overall it was a good game. The fast bowlers gave us a very good start.

"McCullum batted really well in the middle overs where he took our spinners on and made it quite difficult for us. After that Balaji bowled really well in death overs. That's a plus for us.

"Zak bowled well. Of course Irfan gave us those breakthroughs which were really important. To start off Virat had to open and I think he batted really well. It was good to see Yuvraj Singh come back and score some runs. And all these things were the positives but of course in this format it can happen," he said.

Dhoni said there was nothing he could differently to avoid defeat.

"What should've been done is very difficult to assess now. We used all the bowlers and I didn't want to use an off-spinner because the ball was coming on nicely. I tried everything," he said.

Dhoni denied that they experimented in this game ahead of the T20 World Cup but said they had to assess a few things before the big tournament.

"This was not an experiment. Viru was not fit so we had to make Virat open the innings. He (Sehwag) will come back into the side. It was important to see how Balaji was playing.

"He has done really well in the IPL season. Death overs have been a concern for us so we wanted to see who are our best bowlers. With Irfan, they are fighting for a slot. If Irfan is not playing, the balance of the team goes a bit haywire. I think Bala bowled really well in this game."

Dhoni also backed Rohit Sharma, who could not score a four, required for India's win in the last ball of the match.

"We planned to keep it till the end. We had two set batsmen. We reached a good position in the end but sometimes it doesn't work out. Rohit Sharma is among the big hitters that we have got down the order. With four runs from one ball you need the team's big hitter to take it on. Unfortunately he was not able to strike," he said.