Who is Yuvraj Singh?

When Yuvraj Singh took to the cricket field on September 11, 2012 against New Zealand in a Twenty20 International at Chennai, it was not just another match. It was a day to remember for the entire cricket fraternity, fans, teammates, family and above all the man himself. 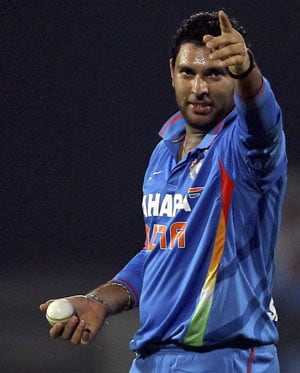 When Yuvraj Singh took to the cricket field on September 11, 2012 against New Zealand in a Twenty20 International at Chennai, it was not just another match. It was a day to remember for the entire cricket fraternity, fans, teammates, family and above all the man himself.

And Yuvi made sure he gave his fans moments to cherish. He bowled 2 overs, took a catch and scored 34 off 26 balls bejeweled with two huge sixes. Although New Zealand ruined his comeback as they pipped India at the post by 1 run. After the match, Yuvraj confessed that he was in tears while fielding in the first over. It indeed was an emotional moment as he made a comeback that was made of fairytale stuff.

Yuvraj had last played for India in a Test match against the West Indies in November 2011 at the Eden Gardens. All he could garner then was 25 runs before being Lbw to Darren Sammy. May be he was battling form then but another tough battle lay in store for him.

What was initially diagnosed as a non-malignant tumour, turned out to be a rare form of germ-cell tumour between his lungs. When that dawned upon the cricketer and his family, his next destination was the United States of America.

Yuvraj might have won a lot of duels on the cricket field but a one-to-one with a 'demon' in the real life could never have been on his mind. But he won that war too. After undergoing chemotherapy in Boston from February to March 2012, he returned home in April. And in less than six months after his treatment he was back on the cricket field.

Yuvraj, born to Shabnam and former Indian pacer Yograj Singh on 12 December 1981, is a player who is known to perform at the biggest stages.

But he was not always interested in cricket. It was a result of a determined father and eventually, a genuine liking for the sport that Yuvraj made his first class debut in 1996. He had already begun carrying his kitbags and leading the hard life of a struggling cricket aspirant.

It was not all about cricket though, as Yuvraj, just like his father Yograj, also displayed his talent in Punjabi movies as a child actor. While Yuvi's father outscored his filmography against the action on field, the southpaw did exactly the opposite to become one of India's finest ODI cricketers.

Yuvraj first came to the attention of people who mattered when he captained the U-19 team of Punjab in the final of Cooch Bihar Trophy against Bihar. He scored 258 in the match. He was later also selected for the U-19 World Cup in Sri Lanka. The Indian team won that tournament.

The south-paw's 'international' talent was showcased in his second ODI against then World Champions Australia. He smashed 84 off 80 with 12 boundaries. India managed to score 265 and win the match by 20 runs.

There was a dip in form towards the end of the year. He was left out of the ODI squad for the series against Australia but he returned to strike a brash 98 against Sri Lanka in late 2001.

2002 continues to be best remembered for Yuvraj's stunning knock with Mohammad Kaif that gave India a win against England in the NatWest Series. He hit 69 off 63 to help Kaif (87) take India to a win from a rather impossible situation of 146/5 chasing 325.

Yuvraj's Test debut came in the 2003. It was at his home ground in Mohali against New Zealand. He scored 20 and 5* but the match ended in a draw.

A freak injury during a game of Kho-kho during the 2006 edition of ICC Champions Trophy got him some undesired rest.

Yuvraj fought it out however and made his chances in the national team count more often than not. He was named man-of-the-series in three consecutive series' against South Africa, Pakistan and England, in late 2005-early 2006 - the era of Sourav Ganguly vs Greg Chappell.

Yuvraj hit Stuart Broad of England for 6 sixes in six balls in the 2007 World T20 in South Africa. Yuvraj re-emphasized that he was a knock-out player.

Yuvraj has been quite a player off the field. He shared his most sincere and lasting relationship with actress Kim Sharma. The pressure of maintaining a hi-profile relationship got to them and both kept a low profile until the news of a spat between the two broke out.

Since then, he has either been in a relationship or has been rumoured to have been in one repeatedly. Deepika Padukone, Riya Sen, Minisha Lamba, Preity Zinta, the number is quite endless.

In 2011, Yuvraj made a comeback into the side after battling poor form. He powered his team through to the title in the 50-over World Cup. He was adjudged man-of-the-series for his efforts. His knocks as the leader of the new IPL team - Pune Warriors - were prolific too.