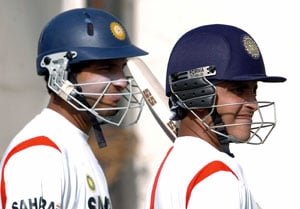 "It is incredible to say the least. In spite of lack of match practice there were glimpses of vintage Yuvraj in the match. He looks fit and his performance will only improve with time. it was a very satisfying knock," Ganguly told a Bengali news channel.

In his comeback game post a battle with cancer, Yuvraj played an aggressive 34-run cameo in India's unsuccessful chase against New Zealand in the second Twenty20 in Chennai Tuesday.

As the Indian team gears up for the T20 World Cup in Sri Lanka, Ganguly said the shortest format of the game was the ideal platform for Yuvraj's comeback.

"T20 is ideal platform for him to start his comeback as he will spend only 3-4 hours on the field. The mental and the physical exertion will be less when compared to the longer formats of the game," said Ganguly.

The former India opener also said the expectations from Yuvraj in the upcoming world cup will be high.

"He is a proven performer and expectations have always been high from him. Not only the fans but the team will also expect consistent performance from him. He has played for a long time to be bothered by the burden of expectations," added Ganguly.