India vs England: After Krunal Pandya's whirlwind half-century on ODI debut, he answered some questions as brother Hardik took over the mike. 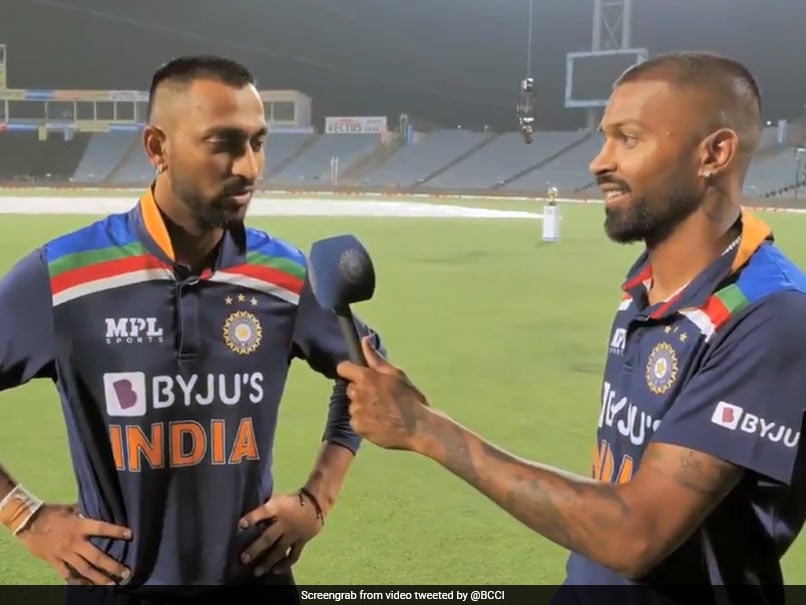 IND vs ENG: Hardik Pandya spoke to Krunal Pandya about his ODI debut and their late father.© Twitter

The first ODI between India and England in Pune on Tuesday was an emotional day for all-rounder Krunal Pandya. The Pandya brothers lost their father in January this year, and as Krunal got his maiden cap from brother Hardik, he was overcome with emotion and raised it to the sky. Then, he came out to bat and channelled the emotion into a thrilling performance, smashing a 31-ball 58 to help get India out of a rut and power them to a total of 317/5.

Krunal Pandya broke down after the knock, and choked up while being interviewed in the innings break. He was later seen in tears, as Hardik hugged and consoled him.

After the match ended, with India registering a big victory, Hardik interviewed Krunal about his stunning knock on debut.

Our father was with us in dressing room: Pandya brothers @hardikpandya7 interviews @krunalpandya24 post his emotional knock on ODI debut. This has all our heart - By @RajalArora #TeamIndia #INDvENG @Paytm

"Dream come true, I have worked so hard to be here, especially in the last one-and-a-half months I have been putting in those hard yards, not only in terms of cricket, but everything from taking care of my diet, to fitness to everything," Krunal Pandya said about receiving his maiden ODI cap.

"This is all dedicated to my old man, his blessings are there with us. Obviously, it was an emotional moment for me and you. Getting a cap from you, somewhere up in the air, he will be having a good night today and enjoying the way I batted," he said.

Krunal Pandya went on to reveal how their father was "with them" in the dressing room for his debut.

"Our father passed away on the 16th morning, I was playing Syed Mushtaq Ali Trophy. Our father had a habit of keeping everything ready, his shoes, his pant, and his hat. Before this game, I got our dad's bag here from Baroda. I know he is not with us, but at least the clothes he was supposed to wear for that game, I thought I'll bring those and keep it in the dressing room," he said.

"That's why I said, for the first time in our lives, our father has come to the dressing room when you're playing," Hardik chimed in.

Hardik also said that he was happy that he got out, because it allowed Krunal to come in to bat and play his special inning.

Hardik said the knock was almost like an early birthday gift for Krunal from his father. Krunal Pandya turned 30 on Wednesday.