India vs England: India fielded two new players in the first ODI against England, with Krunal Pandya and Prasidh Krishna getting their caps. 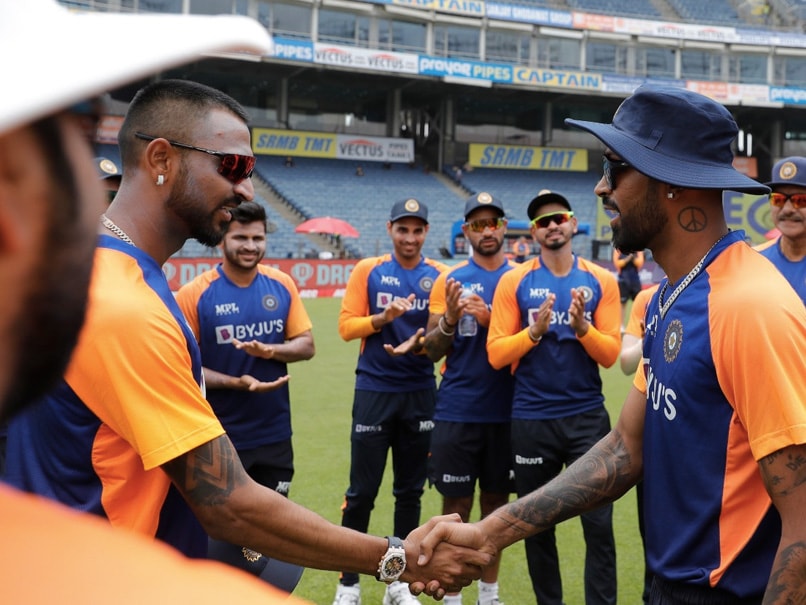 IND vs ENG: Krunal Pandya got his maiden ODI cap from his brother Hardik.© BCCI

India all-rounder Hardik Pandya gave brother Krunal his maiden ODI cap ahead of the first game against England in Pune, with the latter set to make his 50-over debut on Tuesday. Pacer Prasidh Krishna also received his maiden cap ahead of his debut. While Krunal has represented India in T20 Internationals, the game marks Prasidh Krishna's international debut. The Indian cricket board tweeted a video of the team huddle before the toss, where the duo received their caps.

Interestingly, the game will see two pairs of brothers face off against each other. While India have the Pandya brothers as their all-rounders, England have opted to field both Tom Curran and Sam Curran.

India have also named Kuldeep Yadav in their playing XI, with Yuzvendra Chahal missing out, while KL Rahul returns to the team as wicketkeeper, with Rishabh Pant rested.

England won the toss at the Maharashtra Cricket Association Stadium in Pune and opted to field.

India captain Virat Kohli said he was happy with the outcome and that he would have opted to bat had the toss been in his favour.

India and England are facing off in a three-match ODI series to wrap up England's tour of the country.

India won the Test series with a comfortable 3-1 margin, and edged a thrilling T20I series 3-2.

Hardik Pandya Prasidh Krishna Cricket
Get the latest updates on India vs South Africa and check out  Schedule, Results and Live Score. Like us on Facebook or follow us on Twitter for more sports updates. You can also download the NDTV Cricket app for Android or iOS.