Deepak Chahar registered the best figures for any bowler in the shortest format going past Ajantha Mendis, who had taken six wickets for eight runs against Zimbabwe. 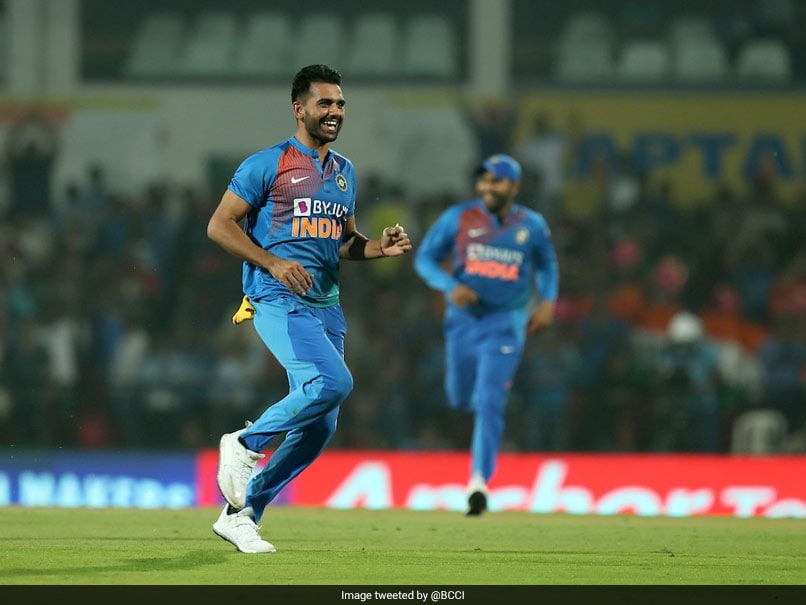 Deepak Chahar finished the 3rd T20I vs Bangladesh with figures of six for seven.© Twitter

Deepak Chahar scripted history as he became the first Indian male to claim a hat-trick in Twenty20 Internationals (T20I) during the third T20I against Bangladesh in Nagpur on Sunday. Deepak Chahar removed Shafiul Islam on the final delivery of the 18th over and then struck twice in the final over to remove Mustafizur Rahman and Aminul Islam to complete his hat-trick. The 27-year-old finished with figures of six for seven to help India bowl out Bangladesh for 144 in their chase of 175. While Deepak Chahar is the first Indian male to claim a hat-trick in the T20Is, four bowlers; Chetan Sharma, Kapil Dev, Kuldeep Yadav and Mohammed Shami have achieved the feat in the 50-over format. In Tests, only Harbhajan Singh and Irfan Pathan are the two Indian bowlers with a hat-trick to their name. Ekta Bisht was the first Indian to take a hat-trick in T20Is in a women's match against Sri Lanka in 2012.

Cricket fraternity applauded Chahar for his remarkable performance with the ball against Bangladesh.

Exceptional bowling by @deepak_chahar9!
He bowled very smartly and used his variations well to pick up crucial wickets at crucial stages.
Special mention to @IamShivamDube, @ShreyasIyer15 & @klrahul11 to give #TeamIndia the series victory in the decider. #INDvsBAN pic.twitter.com/JTLgrC1dUz

Deepak Chahar, what an outstanding spell, the best in the history of T20 international's , great knock from Shreyas Iyer as well and a wonderful victory for Team India. #IndvsBan

Very impressed with the way @deepak_chahar9 has evolved as a T20I bowler. Always had the ability to pick up wickets with the new ball but has worked hard to bowl in the middle and end overs. Got a lot of variations up his sleeves & knows when to use them. #INDvsBAN

Deepak Chahar's performance was a memorable one as he registered the best figures for any bowler in the shortest format. Chahar went past Sri Lanka's Ajantha Mendis who had taken six wickets for eight runs against Zimbabwe back in 2012.

Apart from Chahar and Mendis, who has picked up six wickets twice in T20Is, Yuzvendra Chahal is the only other bowler who has claimed six wickets in a T20I match.

In the match, India posted 174 for five after being put into bat by Bangladesh in the series-decider in Nagpur.

Shreyas Iyer top-scored for India with a knock of 62 while KL Rahul chipped in with a half-century.

Chahar finished the game in the last over by picking up two wickets in two balls to bowl out Bangladesh.

Yuzvendra Chahal India vs Bangladesh Cricket
Get the latest updates on ICC T20 Worldcup 2022, check out the Schedule and Live Score. Like us on Facebook or follow us on Twitter for more sports updates. You can also download the NDTV Cricket app for Android or iOS.