The ODI series decider is expected to be a high-scoring match with both the sides boasting impressive batting line-ups. 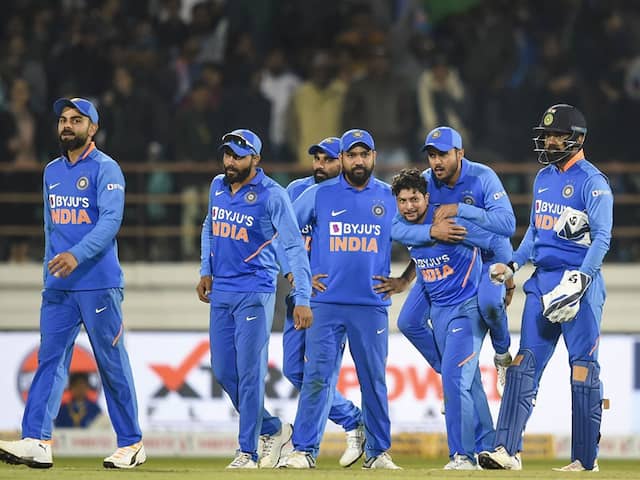 India beat Australia by 36 runs in Rajkot, having suffered a 10-wicket loss in Mumbai.© PTI

Virat Kohli will look to impress one and all when he returns to his Indian Premier League (IPL) franchise home ground M Chinnaswamy Stadium in Bengaluru for India's third and final One-day International against Australia on Sunday. The three-match series is currently locked at 1-1 after India outclassed Australia by 36 runs in Rajkot, having suffered a 10-wicket loss in Mumbai. Much like the first two matches, the series decider is expected to be a high-scoring match with both the sides boasting impressive batting line-ups.

After a crushing defeat in the series opener, captain Virat Kohli had admitted that India were "totally outplayed in all departments" by a "strong Australian team".

India were bowled out for 255 runs in 49.1 overs after being asked to bat. However, opener Shikhar Dhawan impressed with a 74-run knock and a 121-run stand with KL Rahul (47) at the Wankhede Stadium.

In reply, Australia rode on unbeaten centuries by openers David Warner and Aaron Finch to chase down the target in 37.4 overs and register their biggest ever ODI victory over India by the margin of wickets.

"We were totally outplayed in all departments. It's a strong Australian team, if you don't play well, they could hurt you. We saw that with the bat in hand. We didn't get enough runs. I thought we were too respectful at certain phases and it cost us. Can't do that against a team like Australia," Kohli had said after the match in Mumbai.

Kohli inspired his team to a series-levelling win in the subsequent match. He led India by example, scoring a measured knock of 78 runs, including six boundaries.

Meanwhile, Dhawan top-scored again with 96 runs off 90 balls, including 13 boundaries and a six. However, he was hit on the rib cage by a Pat Cummins bouncer. He didn't take the field for the entire duration of the Australian innings

According to news agency PTI, the Indian team management is confident that Dhawan will be available for the third ODI. It couldn't be ascertained whether the 34-year-old left-handed batsman has had a precautionary scan to detect the extent of injury.

Another injury scare was when opener Rohit Sharma hurt his left hand while fielding in Rajkot. Rohit dived awkwardly to save a boundary at deep point when he hurt his left-shoulder.

Much like Dhawan, Rohit was seen writhing in pain before physio Nitin Patel took him off the field.

After the match, India captain Kohli said Rohit is expected to be fit for the Bengaluru ODI.

"Rohit's left shoulder has popped out of few times, and he should be good to go in the next game," he said.

In the first ODI, young wicketkeeper Rishbah Pant was hit on the helmet by a Cummins bouncer, which left him concussed and out of the second match.

Andhra Pradesh wicketkeeper-batsman KS Bharat was called in as back-up for Pant.  However, Pant might return into the squad for the third ODI.

Amid injuries, India discovered a "multi-dimensional player" in KL Rahul, who scored 80 runs and pulled off a remarkable stumping to help India equalise the ODI series.

"It's important to not leave someone like KL out. You saw how he batted today. This is probably the best he's played at the international level. The knock showed maturity and class, and we know exactly what we're doing in the dressing room," Kohli said in Rajkot.

"KL is becoming a multi-dimensional player, and it's really great when players step up like this," he added.

M.Chinnaswamy Stadium, Bengaluru India vs Australia, 3rd ODI
Get the latest Cricket news, check out the India cricket schedule, Cricket live score . Like us on Facebook or follow us on Twitter for more sports updates. You can also download the NDTV Cricket app for Android or iOS.