Virat Kohli was not impressed with DRS and let his displeasure known in the post-match presentation ceremony. 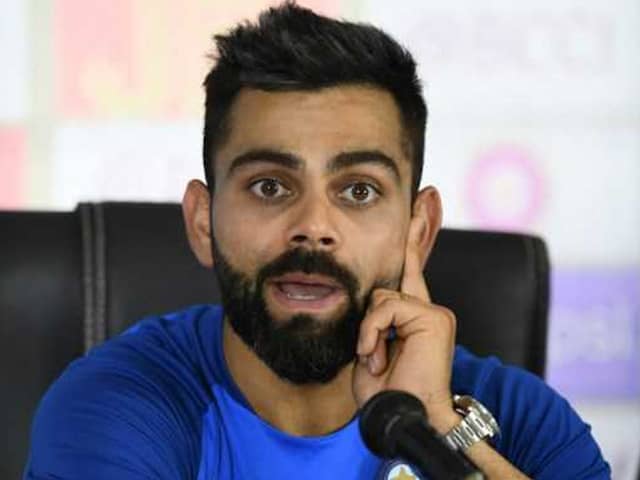 Virat Kohli slammed the Decision Review System saying it's "not consistent at all".© AFP

Not many would have given Australia any hope after Shikhar Dhawan's sensational century and Rohit Sharma's whirlwind 95 helped India post a mammoth 358 for nine in 50 overs after Indian skipper Virat Kohli won the toss and elected to bat on a flat track in Mohali on Sunday. However, the visiting Australians pulled off a stunning upset with a record chase that helped them level the five-match One-day International (ODI) series 2-2. India captain Virat Kohli was not a happy man and beside criticising the hosts' sloppiness on the field, he waded into the Decision Review System (DRS) for being inconsistent.

Kohli was referring to a call that came against Australia's match-winner Ashton Turner. While batting on 41 in the 44th over, Turner appeared to edge a delivery to wicket-keeper Rishabh Pant.

Though the on-field umpire turned down India's appeal, the hosts asked for a review. Replays showed a clear spike on snickometer but the third umpire deemed he didn't have enough evidence to overturn the on-field umpire's decision.

Turner went on to smash an unbeaten 84 off just 43 balls, including five fours and six maximums to leave India shell-shocked.

Kohli was not impressed at all with the decision and let his displeasure known in the post-match presentation ceremony.

"The DRS call was a bit of surprise for all of us and it's becoming a more of a talking point every game. It's just not consistent at all, that was a game-changing moment," said the Indian skipper.

This is not the first time in the series that the DRS has been in the spotlight.

During Friday's third ODI in Ranchi that Australia won, the DRS had made headlines after a ball-tracking error.

Finch was batting on 93 when he was given out LBW off the bowling of Kuldeep Yadav. The Australian captain asked for a review with the replays showing Kuldeep's delivery pitching on middle stump and striking the Australian on the front pad.

But when ball-tracking technology was called on to judge the predicted path of the ball, the computer graphic had the ball pitching on the line of leg stump and hitting leg stump.

The final ODI of the thrilling series will be played at the Feroz Shah Kotla in Delhi on Wednesday.

Virat Kohli Kuldeep Yadav Ashton Turner India vs Australia, 2018/19 India vs Australia, 4th ODI Cricket
Get the latest updates on IPL 2020, check out the IPL Schedule for 2020 and Indian Premier League (IPL) Cricket live score . Like us on Facebook or follow us on Twitter for more sports updates. You can also download the NDTV Cricket app for Android or iOS.