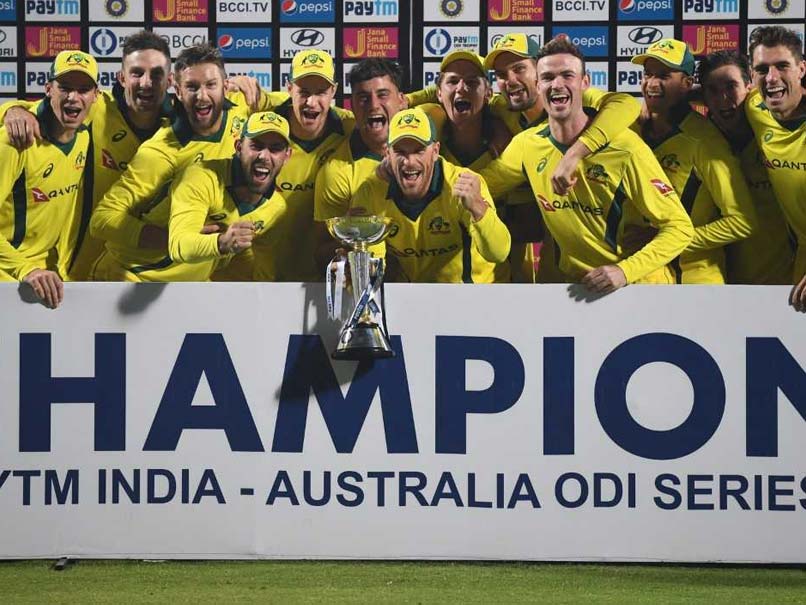 Australia were 0-2 down before they won three matches in a row to clinch the ODI series 3-2.© AFP

A fluent century by Usman Khawaja and incisive bowling helped Australia ease to a 35-run series clinching win in the fifth one-day international on Wednesday. Adam Zampatook three wickets to help dismiss India for 237 on the last ball of their innings after Khawaja's 100 guided the tourists to 272 for nine at Delhi's Feroz Shah Kotla ground. Pat Cummins, Jhye Richardson and Marcus Stoinis claimed two wickets each to set up Australia's first win in a five-match ODI series after being 0-2 down.

But the left-handed Khawaja stood out for the tourists with his 100 off 106 deliveries that guided Australia to what turned out to be a match-winning score.

His scores of 50, 38, 104 and 91 in the previous matches made him stand tall in the batting chart between the two teams.

The left-right batting pair of Khawaja and Handscomb stayed firm during a 99-run stand to lay the foundation of their team's total after skipper Aaron Finchwas out on 27.

Khawaja got the second hundred of his ODI career with a single off Kuldeep Yadav as he waved the bat to an applauding Australian dressing room.

He lost his wicket in the next over to paceman Bhuvneshwar Kumar with a drive to cover that was safely caught by skipper Virat Kohli.

Ravindra Jadeja returned to get the dangerous Glenn Maxwellfor one and Handscomb was caught behind off Shami as Australia slipped to 182-4.

The Aussies kept losing wickets but Richardson played a useful cameo of 29 off 21 deliveries before being run out on the final ball of the 50th over.

India were reduced to 132 for six in their reply but Kedar Jadhav, who made 44, and Kumar threatened to pull off the chase during their 91-run stand for the seventh wicket.

Cummins got Kumar caught and bowled for 46 and Richardson sent back Jadhav to silence the home crowd.

Earlier Cummins drew first blood after getting Shikhar Dhawan caught behind for 12 on a pacy away-going delivery.

But it was Stoinis who got Kohli's prized scalp after the star batsman edged a cross-seam delivery to wicketkeeper Alex Carey. He was on 20.

Spinner Nathan Lyon and Zampa then combined to get a wicket each and the hosts slipped to 120 for four midway into the innings.

Rohit Sharma, who survived a dropped chance on 53, could not capitalise on the spill by Glenn Maxwell off Zampa as he got out to the same bowler three runs later.

It was India's final ODI before the World Cup in England and Wales starting May 30.

Australia head to the UAE to play Pakistan later this month.

Bhuvneshwar Kumar India vs Australia, 2018/19 India vs Australia, 5th ODI Cricket
Get the latest updates on IPL Auction 2023 and check out  IPL 2023 and Live Cricket Score. Like us on Facebook or follow us on Twitter for more sports updates. You can also download the NDTV Cricket app for Android or iOS.