Shikhar Dhawan scored his 16th ODI hundred off 97 balls, a century in ODI cricket after 17 matches and nearly six months. 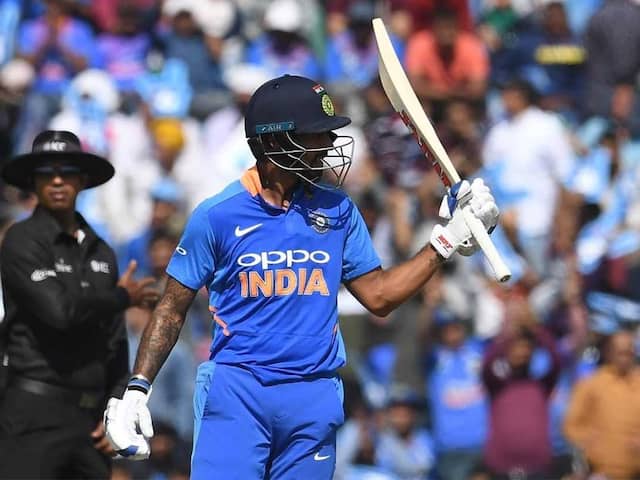 Shikhar Dhawan smashed 12 boundaries and a six to reach the triple figures.© AFP

Shikhar Dhawan returned to form after a series of failures to lift India to a comfortable position after they opted to bat in the fourth One-day International against Australia at the Punjab Cricket Association IS Bindra Stadium, Mohali, on Sunday. The 33-year-old southpaw batsman scored his 16th ODI hundred off 97 balls, a century in ODI cricket after 17 matches and nearly six months. It was Shikhar Dhawan's third ODI century against Australia. The Indian opener had last scored an ODI hundred in 2018 Asia Cup in a Super Four match against Pakistan on  September 23, 2018.

Dhawan's remarkable return to form has given India a boost ahead of the ICC World Cup 2019, starting on May 30 in the UK.

The left-handed batsman was receiving constant flak in the recent past for his dipping form. He was also demoted from an A-plus contract to an A grade category in the players annual contract, released by the Board of Control for Cricket in India (BCCI) on Thursday.

The BCCI announced the annual contracts late on Thursday night, handing retainership to 25 cricketers in four groups of A plus (Rs 7 crore), A (Rs 5 crore), B (Rs 3 crore) and C (Rs 1 crore).

Not only Dhawan but pacer Bhuvneshwar Kumar has also been dropped from the highest-paying category and now only three players, skipper Virat Kohli, limited overs deputy Rohit Sharma and premier pacer in all formats speedster Jasprit Bumrah, figure in the elite category.

Leading the five-match ODI series 2-1, India made a confident start in the fourth ODI in Mohali. Rohit Sharma and Shikhar Dhawan stitched a stand of 193 runs to register the best-ever opening-wicket partnership against Australia in the ODI cricket.

Shikhar Dhawan India vs Australia, 2018/19 Cricket India vs Australia, 4th ODI
Get the latest Cricket news, check out the India cricket schedule, Cricket live score . Like us on Facebook or follow us on Twitter for more sports updates. You can also download the NDTV Cricket app for Android or iOS.