Rohit Sharma has been spotted calling Yuzvendra Chahal 'greatest of all time' jokingly on various occasions.

Akash Khanna
Read Time : 4-min
Yuzvendra Chahal had impressed with the willow in the 4th ODI against New Zealand. © Instagram

Rohit Sharma, who led India in the last two One-Day Internationals and three-match T20 International series in New Zealand, will hand over the reins of the team back to regular skipper Virat Kohli when they take field against Australia in the first T20I of the two-match series in Visakhapatnam on Sunday. Under the captaincy of Rohit Sharma, India lost the three-match T20I series in New Zealand. However, the opening batsman seems to share quite a strong bond with his India teammates. On Saturday, Rohit Sharma engaged in a friendly banter with spinner Yuzvendra Chahal that left the fans in splits.

"When the #GoatOfInstagram makes a joke it's mandatory for us commoners to laugh," Rohit captioned a picture, in which he can be seen sharing a laugh with Chahal and all-rounder Krunal Pandya.

When the #GoatOfInstagram makes a joke it's mandatory for us commoners to laugh.

Rohit has been spotted calling Chahal 'greatest of all time' jokingly on various occasions.

Meanwhile, Krunal too joined in, teasing the wrist spinner with a GOAT emoticon. 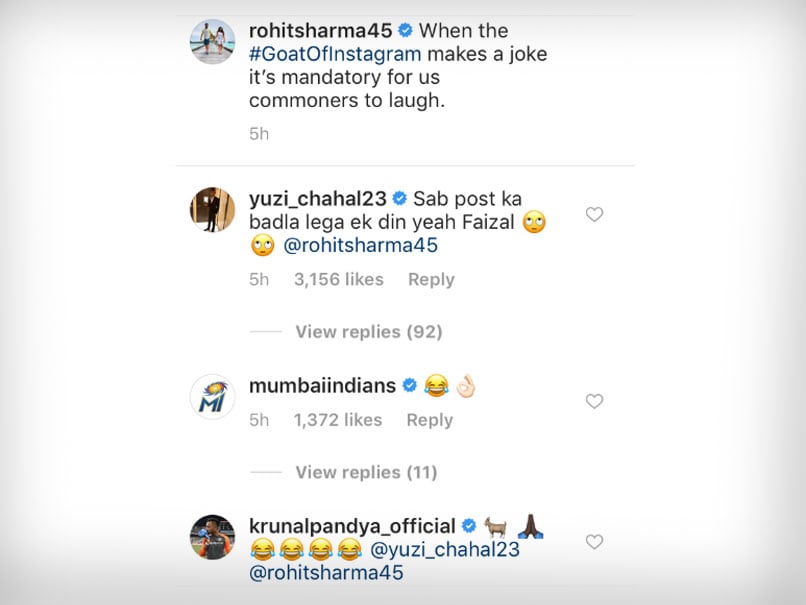 Earlier, Chahal had shared the same picture on Twitter, saying: "My reaction when they tell me you're batting at number 3 tomorrow."

My reaction when they tell me you're batting at number 3 tomorrow.. pic.twitter.com/PAC34Ym1Iv

Chahal had impressed one and all with his fearless batting in the fourth ODI against New Zealand in Hamilton on January 31. He had top-scored for India with 18 runs (not out), smashing three boundaries in his 37-ball knock.

After being asked to bat, India were bowled out for paltry 92 runs in 30.5 overs with seven of their batsmen dismissed for a single digit score. New Zealand chased down the small target in 14.4 overs with eight wickets in hand. However, India won the fifth and final ODI by 35 runs in Wellington to clinch the five-match ODI series 4-1.

"Don't Be Jealous": Yuzvendra Chahal, Rohit Sharma Troll One Another On Instagram