India have now won the latest series against all Test-playing nations. 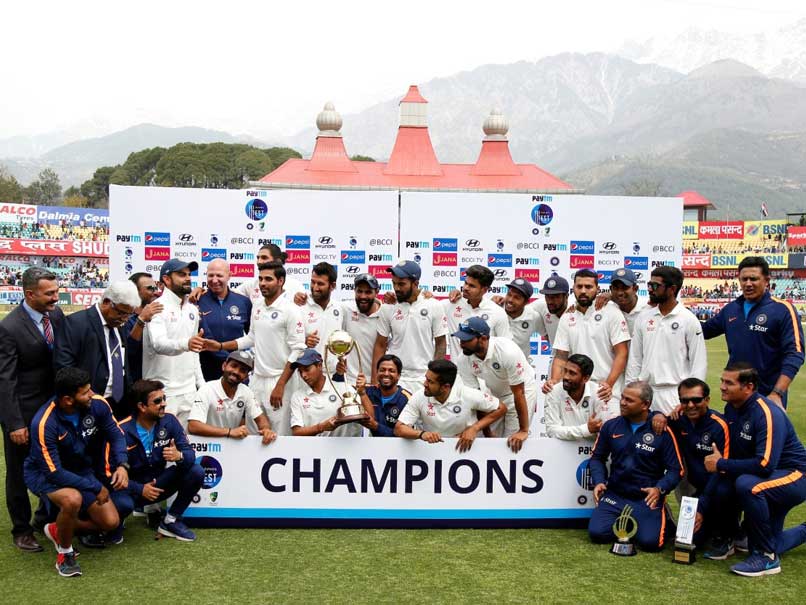 In defeating Australia 2-1 in the four-match Test series that ended on Tuesday, India have accomplished a unique feat -- they now hold the bilateral trophies against all the Test-playing nations. This means that they have won the last series played against all the other nine Test nations. India defeated Australia by eight wickets on Day 4 of the fourth and final Test at the Himachal Pradesh Cricket Association Stadium in Dharamsala to clinch the series and thereby reclaimed the Border-Gavaskar Trophy.

India's victory cemented their position as the No.1 side in world cricket, having won the last seven Test series in succession. Their run began in August 2015 when they beat Sri Lanka 2-1 in a three-Test series.

Since then, they have beaten South Africa 3-0 in a four-Test series at home, the West Indies 2-0 in a four-Test away series, whitewashed New Zealand 3-0 at home, beat England 4-0 out of five Tests, overcame Bangladesh in a lone Test and now beat Australia.

Kohli misfires with bat: The series was unique and a brilliant confidence booster for the hosts because they won the series without Virat Kohli performing with the bat.

The India captain and the outfit's main batsman, who had been in superb form before this series by slamming four double-centuries in as many series, did not perform much with the bat against Australia.

Steve Smith shines: The man with the maximum number of runs in the series was Australian captain Steve Smith. He scored 499 runs in the four Tests which included three centuries and a top score of 178 not out. The Australia skipper was undoubtedly the best batsman of the series as he went on to score three hundreds, two more than anyone else.

Pujara leads Indian batting: Cheteshwar Pujara was the second-highest scorer of the series after Smith and the highest for India. Only Smith and Pujara ended up scoring more than 400 runs in the series.

Pujara scored 405 runs in seven innings at an average of 57.85. He scored one century, which turned out to be his third career double-hundred (202), was the top score of the series and the only double hundred. He also scored two half-centuries.

Consistent Rahul: India opener KL Rahul was the most consistent batsman for India to score six half-centuries in the seven innings he played. He scored the runs at an average of 65.5 with a top score of 90.

Jadeja tops the charts: Among the bowlers, Ravindra Jadeja topped the list for most wickets as he picked up 25 in the series. His 127 runs, which also included two half-centuries in Ranchi and Dharamsala, helped him with the Man of the Series award.

Jadeja, who was also named Man of the Match in Dharamsala, has been in fine form off late. He first joined Ashwin as the No.1 Test bowler in the world and now is the alone at the top after the off-spinner dropped to No.2. Jadeja had two five-wicket hauls and a best bowling figures of 6/63 against Australia.

O'Keefe, Lyon impress: Steve O'Keefe and Nathan Lyon also produced match-winning performances for Australia and both finished with a reasonable tally of 19 wickets. Lyon's 8/50 in at the M Chinnaswamy Stadium Bengaluru turned out to be the best figures of the series.