Having taken 25 wickets and scored two half-centuries in the series against Australia, Jadeja felt that his shoulder has been on "auto-mode". 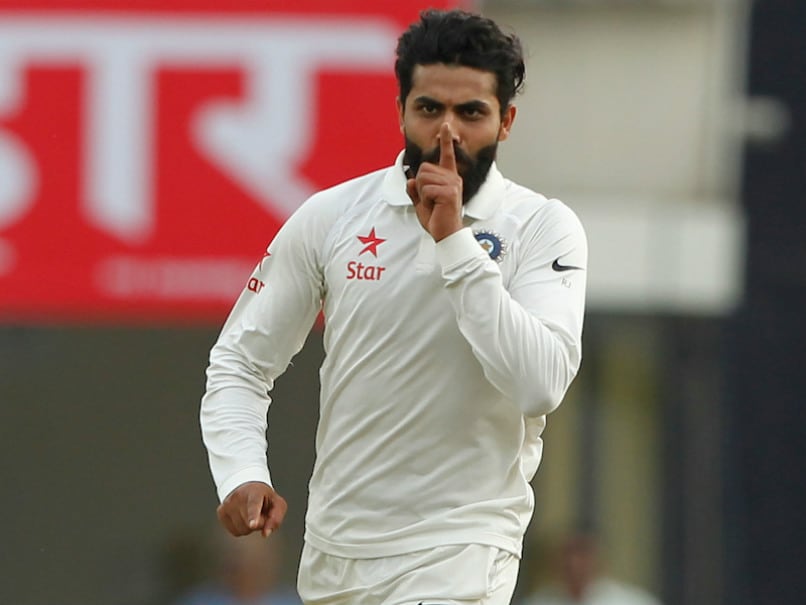 Jadeja is happy that he has been able to perform under pressure in a Test match.© BCCI

He was always a vital cog in shorter formats but his performance in India's ongoing Test season has provided Ravindra Jadeja with both "satisfaction and self belief" to make hay in the five-day format.

Having taken 25 wickets and scored two half-centuries in the series against Australia, Jadeja felt that his shoulder has been on "auto-mode".

"Your confidence increases inherently and now I can back myself as a longer version player. And this shoulder (pointing at it) is on auto-mode and everything is happening automatically."

Jadeja is happy that he has been able to perform under pressure in a Test match.

"Yes, it was a tough situation in the morning, as there was seam and bounce in the wicket. There fast bowlers were bowling at 140 plus speed. I have seen these kind of situations in Test cricket but today I realized what exactly people mean when they talk about challenges of Test cricket."

He is in contention to win the Man of the Series award but for him, the praises earned from his teammates and former players is more valuable.

"It feels good that people say that I am one of the responsible players of this team. Someone, who can perform in any situation across all departments of the game," he said.

"If someone works hard, it is with an aim to become a valuable player. My biggest achievement more than any award, is contributing in a winning cause for my team."

Jadeja admitted that a lead of 32 runs was very crucial as it allowed the bowlers to attack the Aussie batsmen with a free mind. "Sometimes even a 32-run lead is big enough with uneven bounce and when the ball is swinging and deviating after hitting the cracks. And if you see they had three out within score of 30, so it was a crucial lead," he said.

"We were not afraid as we were not on the back foot. In this scenario, one can bowl with a free mind, not thinking about pressure. You can be bindaas (carefree)."

Jadeja felt that Aussie pacers were bowling as good as the Indians but they weren't as lucky as lot of balls flew past the edge.

"There wasn't much of a difference as there pacers like ours were bowling in good areas but sometimes good deliveries miss the edge and at times there are deliveries that can induce an edge. Today with Warner, it was a straight delivery that he edged. That was the breakthrough we needed.

"We already had an upper hand with 32-run lead. The momentum shifted in our favour. We were positive after tea that there will be a turnaround. All the bowlers performed collectively."

The 28-year-old took on Patrick Cummins during the opening session as he knew that he had to get the team closer to that Australian total.

"We were almost close to their score and we needed quick runs. After me and (Wriddhiman) Saha, we didn't have too much of batting left. We were discussing that we will have to make bulk of the runs in our partnership," Jadeja said.

"When I went in, I discussed with Saha that our target would be to get as close to 300 as possible. If we are there till 300, we can go for big shots."

He was happy that the DRS factor was out of his way off the very first ball in the day.

"Good that it happened in the very first ball as then it's just out of your way and there's no disturbance. I was sure that there wasn't any edge. I just told Saha that it's a bit tough situation but we will have to play it out."

Umesh Yadav and Kuldeep Yadav got a few short balls and Jadeja attributed it to the frustration on the part of Aussie bowlers that they could not get wickets.

"Look, when there guys were bowling bouncers at our No's 10 and 11 -- we were already in a good position, so it didn't matter. They were venting their frustration as we were already ahead in the game."

Comments
Topics mentioned in this article
India Cricket Team Ravindra Jadeja India vs Australia 2017 Cricket
Get the latest updates on IPL 2021, IPL Points Table , IPL Schedule 2021 , live score . Like us on Facebook or follow us on Twitter for more sports updates. You can also download the NDTV Cricket app for Android or iOS.