Virender Sehwag believes Mahendra Singh Dhoni must bat at number four for the good of the team as he can contribute in any situation. 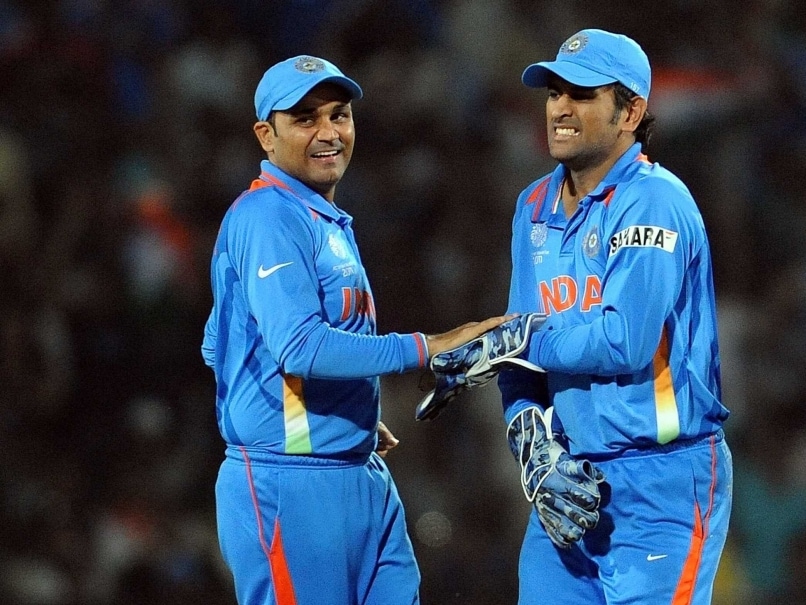 Virender Sehwag has said Mahendra Singh Dhoni can monitor his fitness and can play for 2-3 years as he does not play Tests.© AFP

Mahendra Singh Dhoni can still torment the bowlers around the world for at least two-three years and can win more matches for India if he consistently bats at number four, according to former India opener Virender Sehwag. (Virender Sehwag Picks India as One of the Four Semi-Finalists for World Twenty20)

"If he bats at number four, it is good for the team. He can play fast bowlers and spinners with equal elan and knows when to slow down or accelerate. I have been saying it since 2015 World Cup. I am not saying that he won't get out at that number but he can win more matches for India," Sehwag said in a media function.

Dhoni, 34, has been facing questions on his retirement in the last few months, following a dip in form but the Indian captain has made it clear that he has no such plans.

Sehwag said Dhoni must lead the side at least till 2019 50-over World Cup in England.

"Dhoni can play for 2-3 years. Similar questions were asked in 2011 about Sachin Tendulkar but it (retirement) never happened. Dhoni can play till 2019 World Cup. He does not play Tests and he can manage his fitness," the explosive batsman, who retired recently, opined.

Sehwag also pressed the point that there was no groupism in the team and there was no politics behind his ouster from the side.

"There was no issue between me and Dhoni. It's not compulsory that we always roam around together. In Australia, I, VVS Laxman and Gautam Gambhir were with our families. So we were spending time with them. It was all creation of media that there are differences among players," he sought to clarify.

"It was completely normal. A player is supported on the basis of performance. I was not playing well. I had not scored in the last 3-4 Tests as well as ODIs. We can't drop a performer. Nobody can drop Rohit Sharma now," he said.

Many senior players are forcing their way back into the team like Ashish Nehra, Yuvraj Singh and Harbhajan Singh, asked if he could have done the same, Sehwag said, "I have announced my retirement. If not, the selectors could have considered me as well."

Sehwag also said that he does not see any batsman in the Indian side who could remind him of himself.

Comments
Topics mentioned in this article
India Cricket Team Virender Sehwag MS Dhoni World T20, 2016 Cricket
Get the latest updates on ICC T20 Worldcup 2022 and CWG 2022 check out the Schedule, Live Score and Medals Tally. Like us on Facebook or follow us on Twitter for more sports updates. You can also download the NDTV Cricket app for Android or iOS.