World Test Championship final: As India and New Zealand prepared for the big match, fans were not in a forgiving mood as BCCI posted pictures of the covered pitch as rain forced cancellation of the first session on Day1. 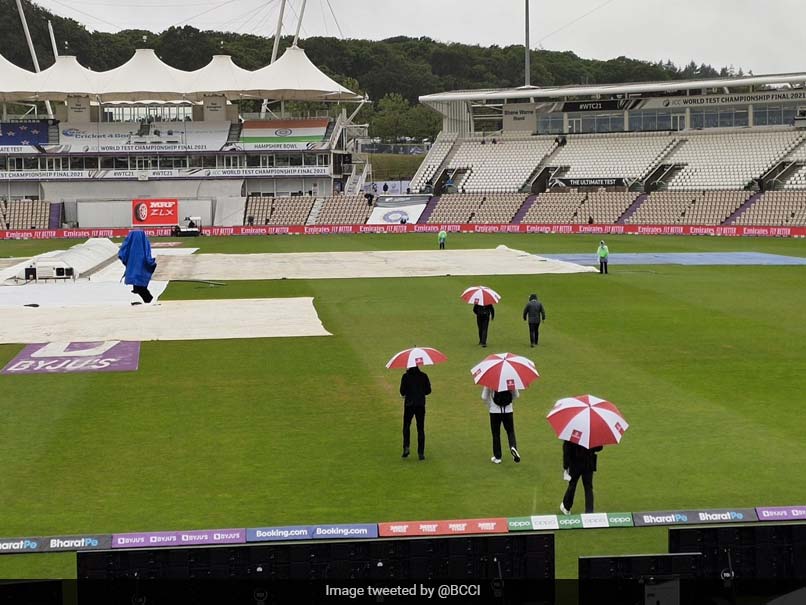 WTC Final: According to the forecast, it could rain in all days of the India vs New Zealand game.© Twitter

Rain gods don't seem to be in a very giving mood as the Board of Control for Cricket in India (BCCI) tweeted pictures of the pitch and the adjoining areas being under covers just an hour before the scheduled start of the World Test Championship (WTC) final between India and New Zealand at The Ageas Bowl in Southampton. As per the weather forecast, rain is set to play a part on all five days of the Test, with the reserve day not being spared either. Things looked gloomy and the toss, which was scheduled to take place at 2:30 pm IST, was delayed as no play was possible in the first session of Day 1.

"Good morning from Southampton. We are just over an hour away from the scheduled start of play but It continues to drizzle here. The match officials are on the field now," the Indian cricket had board tweeted.

Good morning from Southampton. We are just over an hour away from the scheduled start of play but It continues to drizzle here. The match officials are on the field now. #WTC21 pic.twitter.com/Kl77pJIJLo

Fans didn't too kindly to the tweet and bombarded the comments section with memes.

What a waste @ICC & @BCCI Can't even plan such an important final in a better way. #EnglishWeather sucks for Cricket. All the mood of the final is gone to ashes. We could have played in #Australia or #SouthAfrica. Better watch #EURO2020

Everytime, whenever there is an important match in England. Barish hi barish pic.twitter.com/ZccWbfYgHy

Day 1 was eventually called off without any action taking place.

The weather forecast of reserve day, June 23 (25 per cent), has a slightly less probability for rain.

Team India, who arrived in London earlier this month, will go into the summit clash with just a few practice sessions and an intra-squad match under their belt while New Zealand are fresh of a Test series win over hosts England.

Kane Williamson World Test Championship 2021 India vs New Zealand, Final Cricket
Get the latest updates on IPL 2021, check out the IPL 2021 Schedule and Indian Premier League Live Score . Like us on Facebook or follow us on Twitter for more sports updates. You can also download the NDTV Cricket app for Android or iOS.