India and New Zealand clash in the WTC final, starting in Southampton today but before the serious business begins, both teams posed for the shutterbugs. 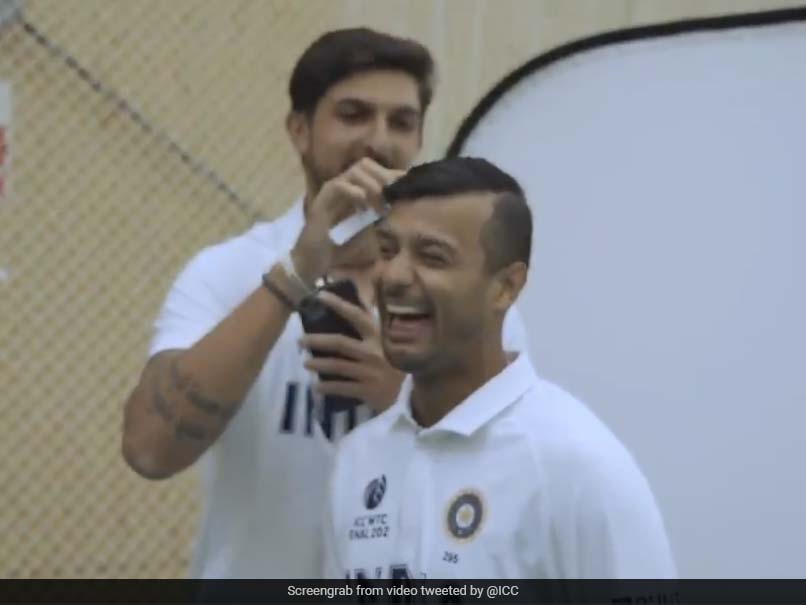 Ishant Sharma made sure Mayank Agarwal was at his presentable best for the cameras.© ICC/Twitter

India and New Zealand clash in the inaugural World Test Championship (WTC) final at The Ageas Bowl in Southampton starting today. But before both teams get down to business, they had a fun photo shoot for the WTC final. From Virat Kohli to Cheteshwar Pujara, all posed for the cameras in their India whites. Mayank Agarwal could not stop himself from having a laugh at the expense of Ishant Sharma when the lanky pacer let out a roar while making a pose of his wicket celebration. New Zealand stars including skipper Kane Williamson were not to be left behind and looked in high spirits as they too got themselves clicked. NZ all-rounder Colin de Grandomme stood out in the photo shoot, thanks to his blossoming mullet.

Take a behind-the-scenes look at what seemed a fun photo shoot for both teams.

The calm before the storm

Take a behind the scenes look at Photo Shoot Day for the #WTC21 Final#INDvNZ pic.twitter.com/7sLK1UX8FA

The WTC final pits two of the modern batting greats in Virat Kohli and Kane Williamson against each other. Both have scored more than 7,000 Test runs apiece, with each averaging over fifty.

The Indian captain, however, has the better record in England, having made two Test hundreds during the 2018 series.

But with the likes of Rohit Sharma, Cheteshwar Pujara and Ajinkya Rahane to fall back on, India have the slight edge on the batting front.

Both teams boast exceptional bowling attacks as well with the likes of Jasprit Bumrah and Trent Boult among some of the best in world cricket currently. But with Ravichandran Ashwin and Ravindra Jadeja in their arsenal, India have a greater variety on show.

India, though, haven't had proper match practice going into the WTC final, and have had to rely on training sessions and intra-squad games.

New Zealand, on the other hand, only recently played a two-Test series against hosts England, which they won 1-0 -- something that will put them in good stead going into the WTC final.

Colin de Grandhomme World Test Championship 2021 Cricket
Get the latest updates on ICC Women's Cricket World Cup 2022 and IPL 2022, check out the Schedule , Live Score and IPL Points Table. Like us on Facebook or follow us on Twitter for more sports updates. You can also download the NDTV Cricket app for Android or iOS.