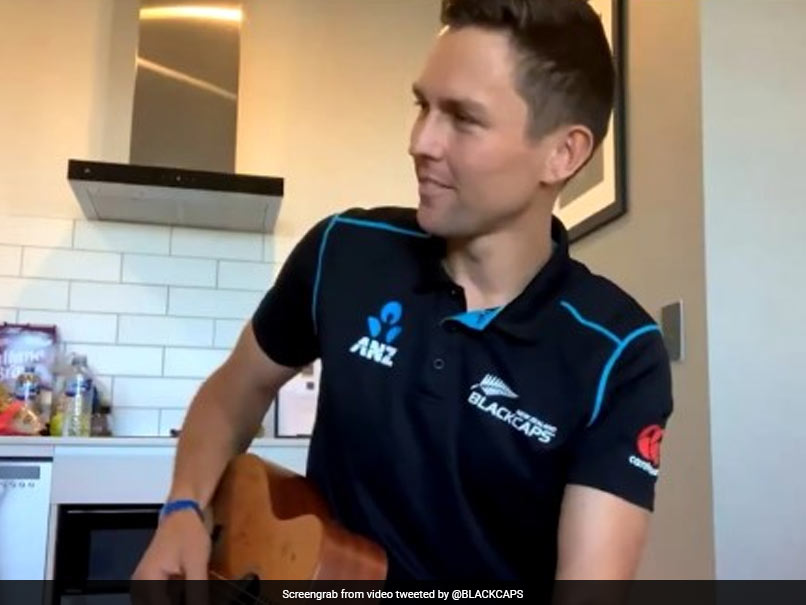 Ace New Zealand seamer Trent Boult recently collaborated with TV presenter James McOnie to write a victory song on the Blackcaps' sensational win in the World Test Championship final against India in Southampton. On June 23, New Zealand became the first World Test Champions by defeating India in the final by eight wickets at the Hampshire Bowl. The duo sang the song and the video was shared by New Zealand's official Twitter handle. The clip starts with Boult saying that the New Zealand team is "tired of the white-ball life". Boult then pays tribute to Devon Conway, Kane Williamson and other teammates.

Interestingly, only two players were able to touch the mark of fifty runs in the WTC final and one of them was the 29-year-old Conway.

The 109-second-long video also takes us back to New Zealand's historic win. Boult paid rich tribute to his skipper Kane Williamson in the song as he sang that they are here "to play for Kane."

The 31-year-old pacer also reminisced the moment when their experienced batsman Ross Taylor scored the winning runs for them, saying that it was a case of "redemption."

"I didn't think Trenty could get any more lovely. Yet here we are," wrote a fan.

I didn't think Trenty could get anymore lovely. Yet here we are.

Another said, "Trent Boult's smile is killing me."

Trent boult smile is killing me

Then there was a Mumbai Indians (MI) fan who said, "Now you have a job to do for MI".

Have a look at some of the other comments:

"We are here to play for kane"

New Zealand are also the No.1 team on the ICC Test rankings.

Trent Boult World Test Championship 2021 India vs New Zealand, Final Cricket
Get the latest updates on Fifa Worldcup 2022 and check out  Fifa World Cup Schedule, Stats and Live Cricket Score. Like us on Facebook or follow us on Twitter for more sports updates. You can also download the NDTV Cricket app for Android or iOS.