India Women vs Pakistan Women, World Cup 2022 Highlights: India won their opening encounter of the 2022 Women's World Cup against Pakistan by 107 runs at the Bay Oval in Mount Maunganui to start the tournament with a bang. 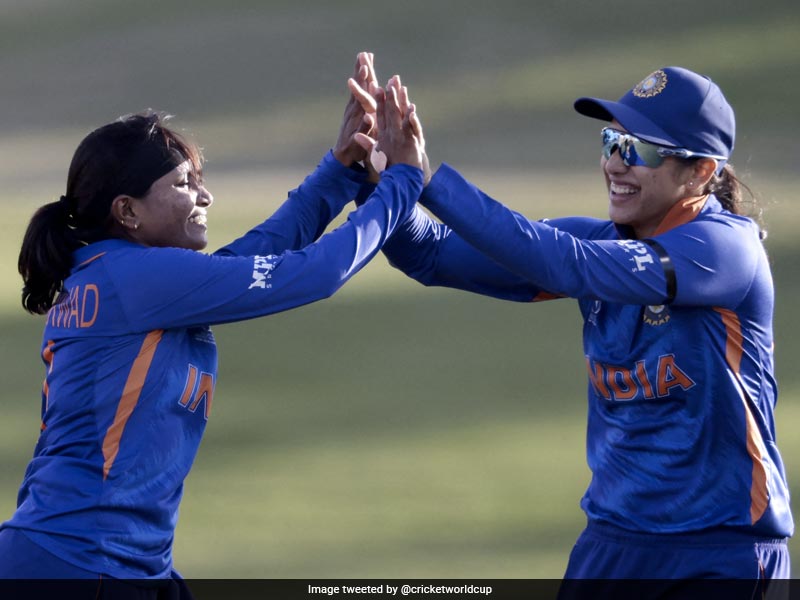 PAK-W vs IND-W, Women's World Cup: Indian bowlers were on target in defence of the 245-run target.© Twitter

India vs Pakistan, Women's World Cup 2022, Highlights: India won their opening encounter of the 2022 Women's World Cup against Pakistan by 107 runs at the Bay Oval in Mount Maunganui to start the tournament with a bang. Defending the 245-run target, the Indian bowlers kept a tight line and length throughout their run-chase to keep a lid on the scoring rate. Jhulan Goswami and Sneh Rana claimed two wickets each while Rajeshwari Gayakwad proved to be the most lethal bowler with four in her quota of 10 overs. (SCORECARD)

Earlier, India batters recovered well to post 244/7 in 50 overs. Smriti Mandhana, Sneh Rana and Pooja Vastrakar scored half-centuries each to propel the innings total past the 240-run mark. Rana and Pooja added 100 runs for the seventh wicket as India scored freely towards the end of the innings despite losing wickets regularly. For Pakistan, Nida Dar and Nashra Sandhu picked two wickets each. The toss was won by Mithali Raj who had decided to bat. Runners-up in the 2017 and 2005 editions, India are eager to go one step ahead and claim the title that has eluded them, especially skipper Mithali Raj and veteran pacer Jhulan Goswami, who are playing their last World Cup.

Here are the Highlights of India vs Pakistan, Women's World Cup 2022 from Bay Oval, Mount Maunganui

Pakistan Women ICC Women's World Cup 2022 Cricket Live Cricket Score Live Blogs Live Score Pakistan Women vs India Women, Match 4
Get the latest updates on IPL Auction 2023 and check out  IPL 2023 and Live Cricket Score. Like us on Facebook or follow us on Twitter for more sports updates. You can also download the NDTV Cricket app for Android or iOS.