ICC Women's Cricket World Cup: Katherine Brunt dismissed Sidra Ameen in the 25th over with a fiery delivery, which she inside edged into her middle stump. 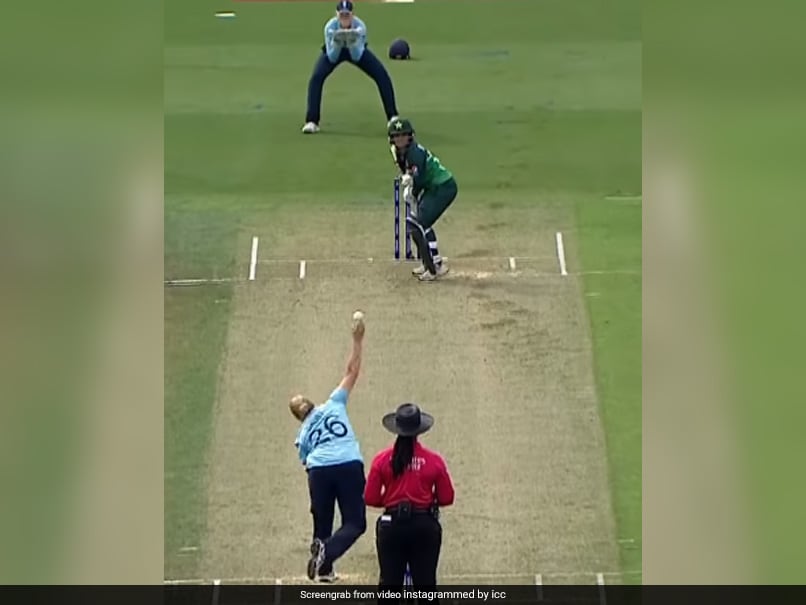 Katherine Brunt was in fantastic form as England cruised past Pakistan in their league stage fixture of the ongoing ICC Women's Cricket World Cup, at Hagley Oval in Christchurch on Thursday. The pacer took three wickets in eight overs, conceding only 17 runs and also registering two maiden overs. Her dismissals accounted for openers Nahida Khan, Sidra Ameen and Nida Dar. In a talismanic performance, Brunt's wicket of Ameen summed up her form as the batter inside edged it to smash the middle stump out of the ground. The incident occured in the 25th over when Brunt sent a spectacular length delivery which forced Ameen on the front foot and then it seamed back in for the inside edge, hitting the middle stump. The wicket proved to be a crucial one as Ameen was also her side's top-scorer with a knock of 32 runs off 77 deliveries. Such was the brilliance of the delivery that the commentator stated, "That is an absolute jaffa".

Here is the video of Brunt's dismissal of Ameen:

Chasing a target of 106 runs, England reached 107 for one in 19.2 overs with Danni Wyatt smashing an unbeaten knock of 76 runs off 68 deliveries. The opener also hammered 11 fours.

Meanwhile, Heather Knight was also unbeaten, playing a knock of 24 runs off 36 balls.

Initially, Pakistan were bowled out for 105 runs in 41.3 overs. Other than Ameen, only two other players reached double figures for Pakistan. Omaima Sohail registered 11 runs off 30 balls and Sidra Nawaz added 23 runs to the scoreboard.

Winning by nine wickets, England have also climbed to fourth position in the league table.

England Women Katherine Brunt Sidra Ameen ICC Women's World Cup 2022 England Women vs Pakistan Women, Match 24 Cricket
Get the latest updates on ICC T20 Worldcup 2022, check out the Schedule and Live Score. Like us on Facebook or follow us on Twitter for more sports updates. You can also download the NDTV Cricket app for Android or iOS.