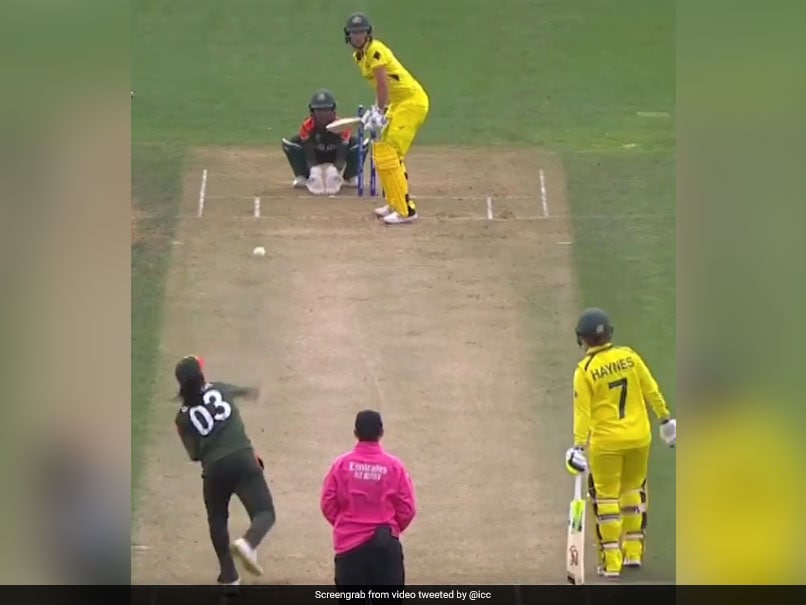 Despite maintaining their unbeaten run in the league stage of the ongoing ICC Women's Cricket World Cup, Australia had a big scare in their recent win against Bangladesh on Friday. Chasing a target of 136 runs, Australia lost five wickets for just 72 runs. It was only after the arrival of Beth Mooney that the world no. 1 team managed to get past the finishing line. After the match, captain Meg Lanning stated that her team was put under pressure. The skipper was also dismissed for an eight-ball duck, losing her wicket to spinner Salma Khatun. On the fourth delivery of the eighth over, Khatun tossed up a delivery, on off stump. Lanning tried to defend it but it passed the outside edge to hit the off stump. Such was the brilliance of the delivery that the commentator exclaimed, "That has gone through the defenses of Meg Lanning!"

Posting the highlight on Instagram, ICC captioned it as, ""We're all slightly in a bit of shock here." Salma Khatun's ripper to dismiss Meg Lanning is the latest in the @bookingcom Best Wickets series of #CWC22".

Here is the video of Khatun's "ripper" to dismiss Lanning:

Mooney smashed an unbeaten knock of 66 runs off 75 balls to seal the win in a match where innings were reduced to 43 overs due to weather conditions.

Other than Mooney, Annabel Sutherland also made a crucial contribution and registered an unbeaten knock of 26 runs off 39 deliveries, as Australia managed to reach 136 for five in 32.1 overs.

Khatun was in excellent form and took three wickets in nine overs, conceding only 23 runs. Meanwhile, Nahida AKter and Rumana Ahmed bagged a dismissal each.

Initially, Bangladesh posted 135 for six in 43 overs with Lata Mondal top-scoring with a knock of 33 runs off 63 balls.

Bangladesh Women Meg Lanning ICC Women's World Cup 2022 Bangladesh Women vs Australia Women, Match 25 Cricket
Get the latest updates on IPL Auction 2023 and check out  IPL 2023 and Live Cricket Score. Like us on Facebook or follow us on Twitter for more sports updates. You can also download the NDTV Cricket app for Android or iOS.