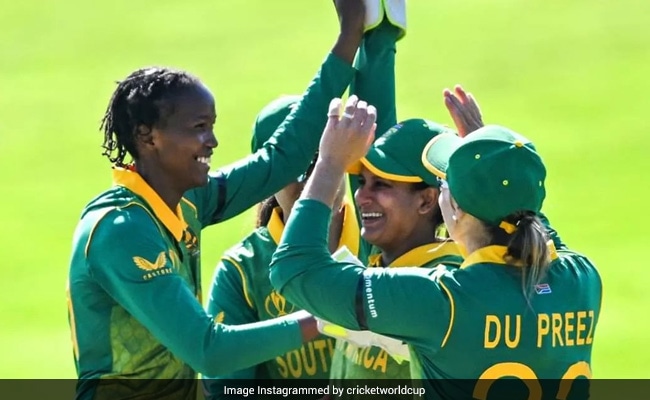 Ayabonga Khaka returned with four wickets as South Africa defeated Bangladesh by 32 runs in the second match of the ongoing ICC Women's 50-over World Cup here at University Oval, Dunedin on Saturday. Chasing 208, Bangladesh got off to a steady start as opening batters Shamima Sultana and Sharmin Akhter put on 27 runs inside the first ten overs and saw out the opening spells of Shabnim Ismail and Marizanne Kapp. The opening pair eventually put on 69 runs for the first wicket.

However, the complexion of the game changed as Proteas took four wickets in quick succession and Bangladesh was reduced to 85/4 in the 27th over. Rumana Ahmed and Nigar Sultana then got together and kept moving the scoreboard at a steady pace.

The duo put on 23 runs for the fifth wicket, but South Africa once again stormed back into the contest with two wickets in quick succession, and Bangladesh was reduced to 113/6, still, 95 runs away from the target.

In the end, South Africa managed to hold its nerve to register a 32-run win.

Earlier, Fariha Trisna scalped three wickets as Bangladesh bowled out South Africa for 207. Jahanara Alam and Ritu Moni also picked up two wickets each as the Proteas were bowled out for a below-par total.

Bangladesh Women Cricket
Get the latest updates on IPL Auction 2023 and check out  IPL 2023 and Live Cricket Score. Like us on Facebook or follow us on Twitter for more sports updates. You can also download the NDTV Cricket app for Android or iOS.