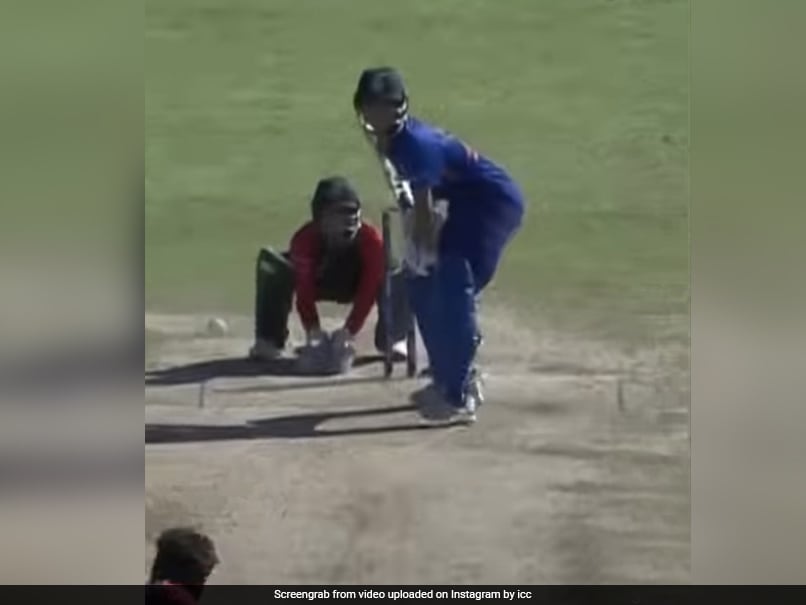 India's Kaushal Tambe hit a huge six off Bangladesh captain Rakibul Hasan to seal victory by five wickets in the U-19 World Cup Super League quarter-finals in Osbourn, Antigua on Saturday. With India chasing a total of 112 runs, Bangladesh bowlers went on the attack and grabbed an early wicket to peg India back. However, Angkrish Raghuvanshi and Shaik Rasheed combined to steady the ship. After finally removing Raghuvanshi, Bangladesh continued to strike at regular intervals and piled the pressure back on India.

However, India continued to keep the scoreboard ticking and Tambe found himself on strike in the 30th over when India needed just one more run to win from the remaining 20 overs with five wickets to spare.

Here is a video of the shot:

India won a good toss and Ravi made full use of the moisture underneath with initial movement in the air helping team's cause.

Ravi, who has the natural ability to bring the ball back into right-handers, had right-handed Mahfijul Islam (2) beaten all-ends up to an inswinger in the second over.

His opening partner left-handed Iftakher Hossain (1) was done in by the slowness of the track as he tried to square cut and was held at point by vice-captain Shaikh Rasheed.

One drop batter Prantik Nawrose (7) was not at all comfortable during his stay and was late into the drive to a delivery that swung away only to offer a catch to Kaushal Tamble in the slips.

Down at 14 for 3 in the eighth over, there was no coming back for Bangladesh boys as they started losing wickets at regular intervals before being bowled out for 111.

Bangladesh U19 ICC Under 19 World Cup 2022 Cricket
Get the latest updates on IPL Auction 2023 and check out  IPL 2023 and Live Cricket Score. Like us on Facebook or follow us on Twitter for more sports updates. You can also download the NDTV Cricket app for Android or iOS.