ICC U19 World Cup 2022: Four-time winners India will take defending champions Bangladesh in the Super League quarter-final of U19 World Cup on January 29. 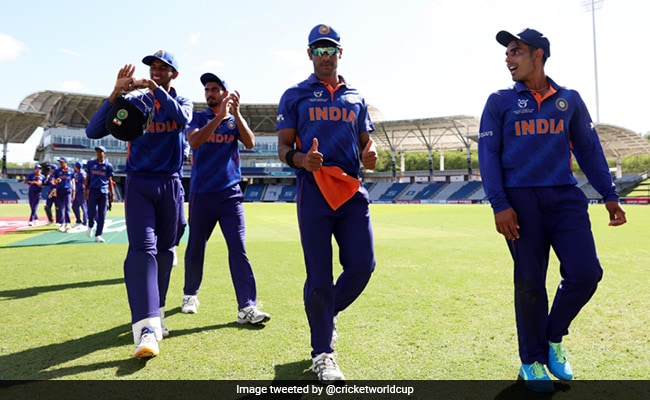 India will face Bangladesh in the U19 World Cup quarter-final

The business end of the ICC Under-19 Men's Cricket World Cup 2022 has arrived and it is clear now who will contest the Super League stage and the Plate competition. Six of the eight Super League teams have previously won the tournament, with India, Australia, Pakistan, South Africa, England, and defending champions Bangladesh all through.

Sri Lanka, who finished as runners-up in 2000, and Afghanistan are the two other teams still in with a chance of lifting the title at the Sir Vivian Richards Cricket Stadium on February 5.

Meanwhile in the Plate quarter-finals, hosts West Indies will look to bounce back from missing out on a Super League spot and finish their first tournament on home soil on a high.

They will be joined by United Arab Emirates, Uganda, Ireland, Canada, Zimbabwe, Scotland, and Papua New Guinea in what is set to be an absorbing contest to decide the Plate winners.

Four-time champions India enter the Super League stages in formidable form, having won all three of their games in Group B to finish top and set up a clash with Bangladesh.

Bangladesh's passage was not quite as stress-free, with the defending 2020 champions recovering from losing their opening game to England to finish second in Group A.

An eight-wicket win over Canada was followed by a nine-wicket triumph (DLS) in a rain-interrupted game against UAE to set up a rematch of the final two years ago.

And while India will fancy avenging their three-wicket defeat in the 2020 showpiece, Bangladesh is finding their stride at just the right time to set the stage for an epic battle.

India U19 Cricket
Get the latest updates on ICC Women's Cricket World Cup 2022 and IPL 2022, check out the Schedule , Live Score and IPL Points Table. Like us on Facebook or follow us on Twitter for more sports updates. You can also download the NDTV Cricket app for Android or iOS.