ICC U-19 Cricket World Cup: India put in a dominating performance to defeat Ireland in their Group B match and also qualified for the Super League quarter-final stage. 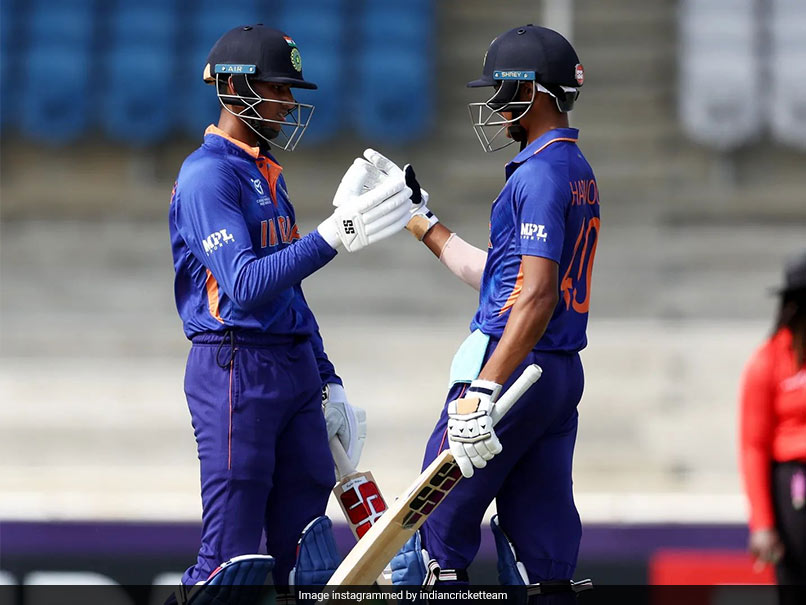 ICC U-19 World Cup: India cruised past Ireland and qualified for the Super League stage.© Instagram

India defeated Ireland by 174 runs to qualify for the Super League quarter-final stage of the ongoing ICC U-19 Cricket World Cup at the Brian Lara Cricket Academy in Tarouba. Chasing a target of 308 runs, Ireland were bowled out for 133 in 39 overs as Kaushal Tambe, Aneeshwar Gautam and Garv Anil Sangwan picked up two wickets apiece for India. Earlier, India posted 307 for five in 50 overs, courtesy of some swashbuckling batting by openers Angkrish Raghuvanshi and Harnoor Singh. Raghuvanshi smashed 79 off 79 balls and also registered 10 fours and two sixes. Meanwhile, Harnoor Singh hammered 88 runs off 101 deliveries and also bagged 12 fours.

Here are the highlights from India's win against Ireland in Group B:

India were without regular skipper Yash Dhull, who reportedly tested positive for Covid-19 along with vice-captain Sheikh Rasheed and four other teammates.

In Dhull's absence, Nishant served as the stand-in captain for India.

This was India's second win in as many matches in the ongoing tournament. In their earlier game, they defeated South Africa by 45 runs with Dhull showcasing some amazing shots with his bat. He smashed 82 off 100 balls and also hit 11 fours.

Meanwhile, Vicky Ostwal was also in fantastic form against the Proteas and took a five-wicket haul in 10 overs, conceding only 28 runs.

Ireland U19 ICC Under 19 World Cup 2022 India Under-19 vs Ireland Under-19, Match 15 Cricket Social
Get the latest updates on ICC Women's Cricket World Cup 2022 and IPL 2022, check out the Schedule , Live Score and IPL Points Table. Like us on Facebook or follow us on Twitter for more sports updates. You can also download the NDTV Cricket app for Android or iOS.